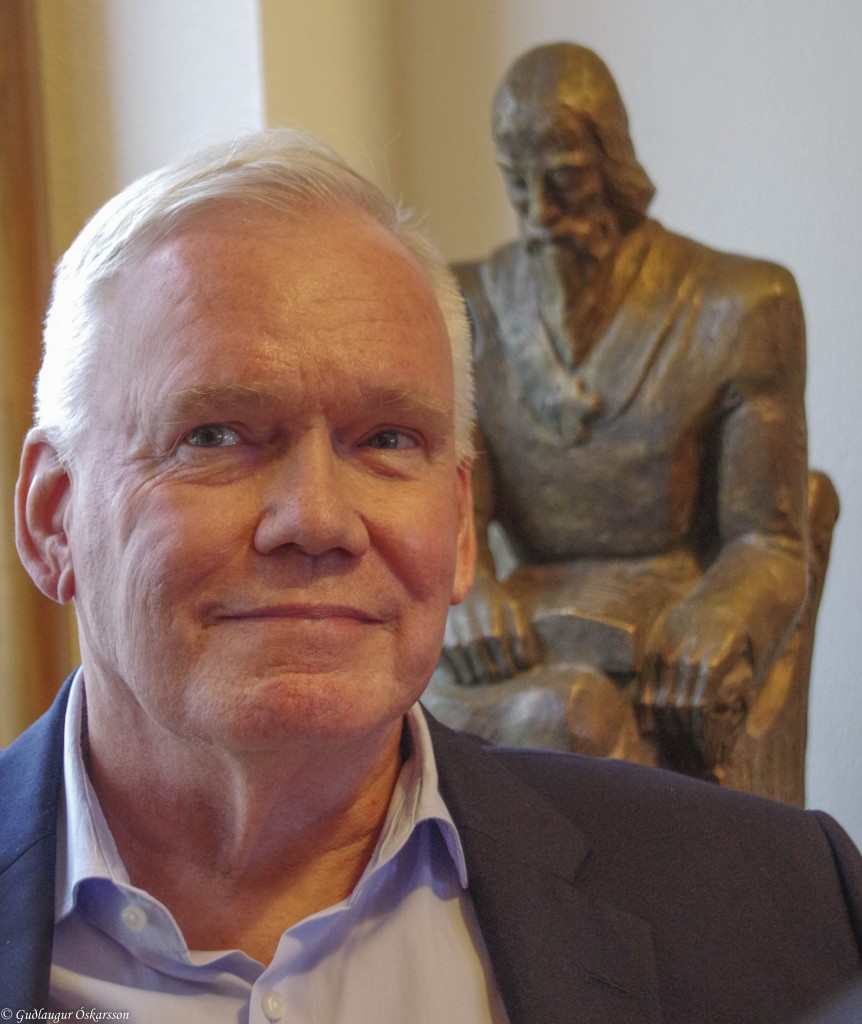 Gissurarson in front of a statue of Snorri Sturluson in the library at Reykholt. Photo: Gudlaugur Oskarsson.

It is nothing new that Icelandic chronicler and poet Snorri Sturluson (1179–1241) is seen as a critic of royal power, RNH Academic Director Professor Hannes H. Gissurarson pointed out in a talk on 19 April 2022 about Snorri’s political theory in Reykholt, where Snorri lived and where he was killed on the order of the Norwegian king. This has been argued by other scholars, for example Sigurdur Lindal, Birgit Sawyer, and Magnus Fjalldal. But what Gissurarson did in his recent book, Twenty-Four Conservative-Liberal Thinkers, was to place Snorri as a pioneer in the conservative-liberal tradition, alongside another 13th century writer, St. Thomas Aquinas. They had in common the idea that kings were no less than their subjects under the law, and that they could be deposed if they broke the implicit social contract, in Snorri’s case as determined by customs and conventions and in Aquinas’ case as determined by the natural law. Snorri went even further and argued in Heimskringla, in the famous speech he put into the mouth of an Icelandic farmer, Einar from Thvera, that it was best for the Icelanders to have no king but the law.

Gissurarson said that several points could be added to his account of Snorri’s thought in his recent book. For example, in the Book of the Icelanders, composed by Ari the Learned in the 1120s, a reference was made to the inherent conflict in Scandinavia between peaceful and thrifty farmers on the one hand and bellicose and profligate kings on the other hand. Again, Snorri’s tale in Heimskringla of Iceland’s four ‘protective spirits’ was a subtle intimation to the Norwegian king not to invade Iceland. Gissurarson found it most likely that Snorri had first written the saga of Olav the Fat (995–1030) who was the first Norwegian king to try and subdue or annex Iceland, and that he had then added sagas about his predecessors and successors. Gissurarson also suggested that Snorri might himself have composed some of the poems in the Saga of Egil, the first real saga of the Icelanders.

A lively discussion followed Gissurarson’s talk with comments by psychiatrist Ottar Gudmundsson, the author of a book about the personalities of Snorri and his contemporaries from a medical point of view, and the Reverend Geir Waage, former Pastor of Reykholt, an avid reader and interpreter of ancient Icelandic literature.