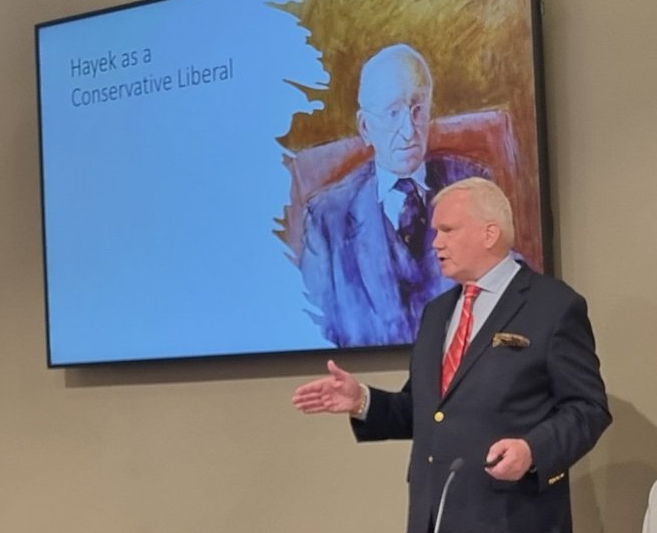 In the spring of 1983, Friedrich von Hayek visited Oxford where a few students had recently founded the Hayek Society, for discussions about classical liberal principles. At a dinner on that occasion, Hayek gave a short speech where he expressed his delight that young people were taking interest in his ideas. But he wanted to extract a promise from them: That they would not become Hayekians, because he had observed how much worse the Keynesians were than Keynes and how much worse the Marxists were than Marx. One of the those Oxford students, RNH Academic Director Hannes H. Gissurarson, recalled this story in his lecture to the European Resource Bank conference in Stockholm 7 June, co-sponsored by Svensk Tidskrift and the Swedish Taxpayers’ Union. He said that he had not always being able to fulfil this promise, as he indeed thought Hayek was the most profound thinker of what he had identified as the conservative-liberal political tradition in his recent book, Twenty-Four Conservative-Liberal Thinkers. The question Hayek had posed was how man could accomplish so much whereas each individual knew so little. His answer was that he (or she) was able to utilise the knowledge of others, in the marketplace through the price mechanism, and between generations by respecting traditions, the accumulated cultural capital of a society.

Gissurarson also recalled several debates inside the Mont Pelerin Society, founded by Hayek in 1947. In St. Moritz in 1957, Hayek criticised American writer Russell Kirk (who was present), arguing that fully-fledged conservatives could not provide any guidance about what direction to take, only about how to resist change. In Sydney in 1985, Gissurarson himself discussed conservatism and liberalism with British scholars John Gray and Kenneth Minogue who both seemed to suggest that liberty was not only the product of a long tradition in the Anglo-Saxon nations, which might be plausible, but also that it could hardly be extended to other nations, or at least with great difficulty. Gissurarson argued on the contrary for universalism—that liberty could be a condition fit for all human beings, not only the Anglo-Saxon nations—and for progress, which manifested itself in the immense reduction of poverty in the world in recent decades, improving living conditions and increasing opportunities, as Johan Norberg had observed in his contribution to the conference. Conservative liberalism was, Gissurarson submitted, a combination of conservative insights and classical liberal principles.