ECR conference in Rome 25 June 2022. In the panel from left: Gissurarson, Adela Mirza, and Antonio Giordano.

The relative success of the Scandinavian countries is not because of the welfare state constructed by social democrats in mid-twentieth century, but rather because of the solid legal and social framework offered by the nation state, supported by a strong third sector, and developed mainly in the nineteenth century, Professor Hannes H. Gissurarson argued in a lecture at a conference on the third sector organised by ECR, European Conservatives and Reformists, in Rome 24–25 June 2022. Gissurarson recalled that two prominent European conservative liberals, Edmund Burke and Alexis de Tocqueville, both had emphasised the third sector, or what is commonly called civil society, constituted by the family, locality, congregation, voluntary associations, sports clubs, schools and last but not least the nation with its history, language, law, literature, legends, myths, folk songs, folk dances and other customs. Individuals were not only consumers and producers entering into enforceable contracts with one another. They were also members of several communities, with ties, attachments and commitmens which followed from this. It was this that often gave their lives direction and meaning.

One reason Denmark fared well was the strength of civil society within the country, as American philosopher Francis Fukuyama observed in a recent book, The Origins of Political Order. Economic reforms in Denmark inspired by Adam Smith had in late 18th century created a large class of independent farmers who became in the nineteenth century loyal supporters of N.F.S. Grundtvig, the great conservative liberal widely seen as the most influential interpreter (or even creator) of Danish national identity. Grundtvig, a pastor, was not only a prolific author of hymns, but also the proponent of ‘happy Christianity’. He was a firm beliefer in religious freedom and free speech, also for those of whom he disapproved. His adage ‘Freedom for Loke as well as for Thor’ is widely known in Denmark: Loke was a devious heathen god, whereas Thor was a heroic god. Grundtvig also contributed much to the people’s high schools established in Denmark and other Nordic countries in the nineteenth century. These schools provided civic education to many who had neither the time nor the means to pursue university education. Grundtvig called them ‘schools for life’ whereas the grammar schools which emphasised extinct languages such as Latin and Ancient Greek were ‘schools for death’.

Denmark became a country of social cohesion and a high level of trust, and civic virtues such as honesty, politeness, punctuality, and industriousness. Danish society was, and is, characterised by reliability, mutuality, solidarity, accountability, transparency, and a low level of corruption. Paradoxically, Gissurarson submitted, Denmark’s military defeats in the nineteenth century when she had to give up Norway to Sweden and Schleswig-Holstein to Prussia, turned out to be a blessing in disguise. The Danes followed the memorable advice of another poet, H.J. Holst, that what was lost outward should be regained inward. They abandoned futile dreams of military conquests and focused instead on trade, industry, and modern agriculture in which they became world leaders. Meanwhile, Danish civil society was strengthened, not only by individual entrepreneurship, but also by voluntary cooperation in many fields, for example in free congregations, local communities, dairies, consumers’ cooperatives, and private high schools.

According to Gissurarson, the three main factors explaining the relative success of the Nordic countries in general and of Denmark in particular were the rule of law, an open economy, and social cohesion. The Nordic countries thrived despite and not because of social democracy. However, social cohesion in Denmark had recently been challenged by the influx of people from cultures hostile to free speech and individual flourishing, Gissurarson added. These people formed enclaves where they tried to implement their own illiberal customs, while they abused the generous welfare provisions Denmark offered. Gissurarson recalled the 2005 conflict between Islamist fundamentalists and a Danish newspaper which had published some cartoons of Muhammad the Prophet. Some imams in Denmark had even travelled to Arab countries in order to encourage them to boycott Danish exports. It was a conflict between the Danish tradition of free speech, for Loke as well as for Thor, and customs alien to Danes. But despite such challenges, Denmark remained a peaceful, prosperous country with a vibrant civil society. She was by no means perfect but perhaps it was the combined strength of her economy and the third sector which had enabled her to escape relatively unscathed from the social democratic experiment and other challenges. Indeed, even the Danish social democrats had already in the 1930s abandoned their abstract internationalism and become Grundtvigians.

Gissurarson said that the three great conservative-liberal thinkers in the Nordic countries were Snorri Sturluson, Anders Chydenius, and N.F.S. Grundtvig. The ultimatum delivered to King Frederick VII of Denmark by the people of Copenhagen on 21 March 1848, resulting in the end of absolutism, was a loud and clear echo of the celebrated speech by Lawman Torgny to King Olav of Sweden in 1018, as retold by Snorri. It was not a coincidence that Snorri’s chronicle of the struggle between Norwegian kings and their subjects was translated into Danish by Grundtvig thirty years before the end of absolutism. 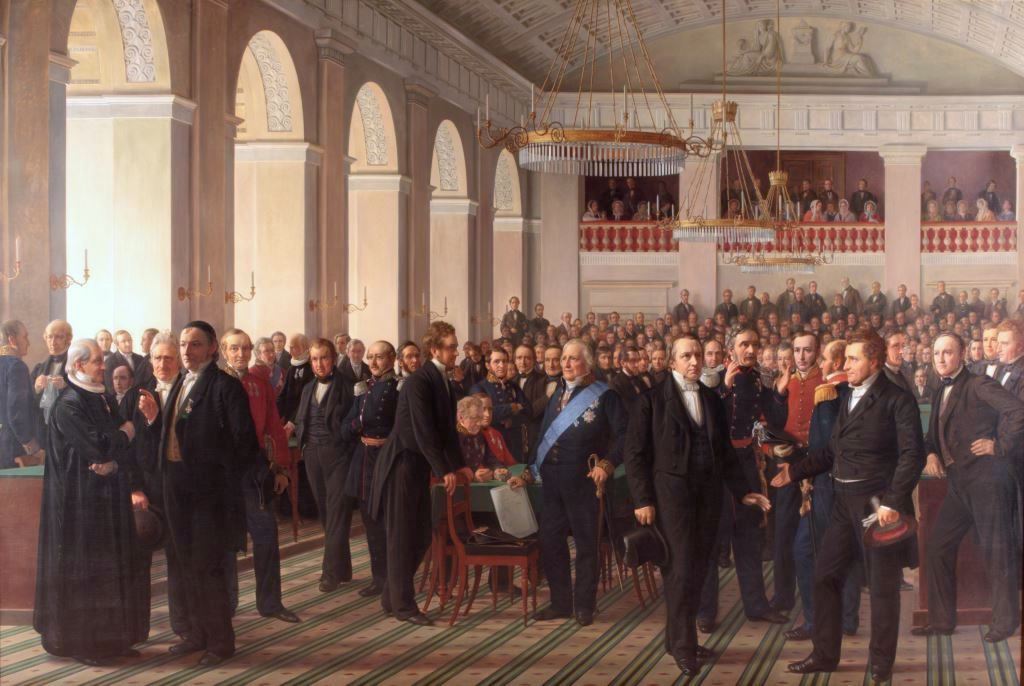 The Danish Constituent Assembly of which Grundtvig was a member wrote a liberal Constitution for Denmark, signed by King Frederick VII on 5 June 1849. Grundtvig wanted to confine welfare provisions to orphans, the sick and the elderly instead of wasting taxpayers’ money on helping those who could help themselves. Painting by Constantin Hansen.