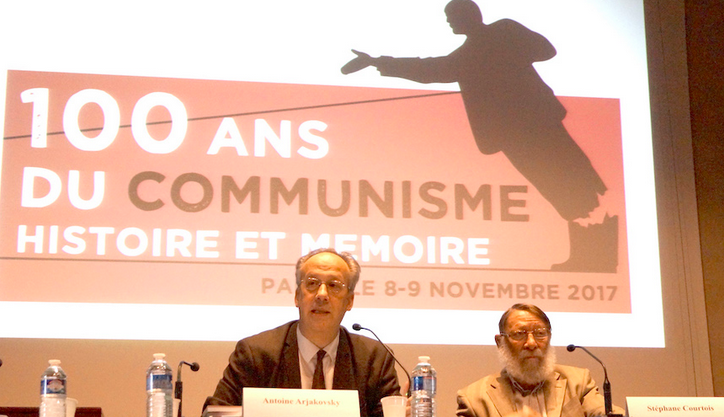 Historians Antoine Arjakovsky and Stéphane Courtois who introduced his new book on Lenin as the inventor of totalitarianism.

RNH is a member institute of the European Platform of Memory and Conscience. At the Platform’s conference in Paris 8–9 November, the following memorandum was passed:

100 years ago, the Bolshevik revolution introduced a murderous utopia. It eradicated the established social and moral order, ushering in a century of totalitarianism in the world. Social engineering which aimed to take total control over people was forcibly and brutally implemented. People were deprived of their basic personal freedoms, the rule of law and humanism, which were replaced by state terror.

100 years after the Bolshevik uprising in Russia, the murderous regime that was introduced then is still deemed somehow acceptable and excusable today. Much more so than Nazism, despite the fact that it produced more than double the amount of victims, many of whom are still unidentified and left lying in unmarked graves. This is unacceptable.

Today, 100 years later, we still witness the relativisation of Communist crimes. Attempts to reduce them to the period of Stalin’s rule, called „Stalinism”, are an unacceptable simplification of the deeply-rooted totalitarian basis of the Communist ideology. As a result, Communist symbols are not yet forbidden in the European public space and Communist parties are still present in public life. Many totalitarian perpetrators were never accused and tried for their crimes.

Today’s Europe is founded on deeply rooted ideas of personal freedom, rule of law, democracy and human rights. Dozens of millions of victims of Communism need respect, remembrance and justice, in order to prevent any attempt of recurrence of Communist or any other totalitarianism.

Therefore, the Platform of European Memory and Conscience and participants of the international conference “100 Years of Communism. History and Memory” which took place in Paris, France on 8-9 November 2017, call Europe to action:

We, the free Europeans of today, share common values. We are obliged to stand up for them and promote them. Democracy matters!