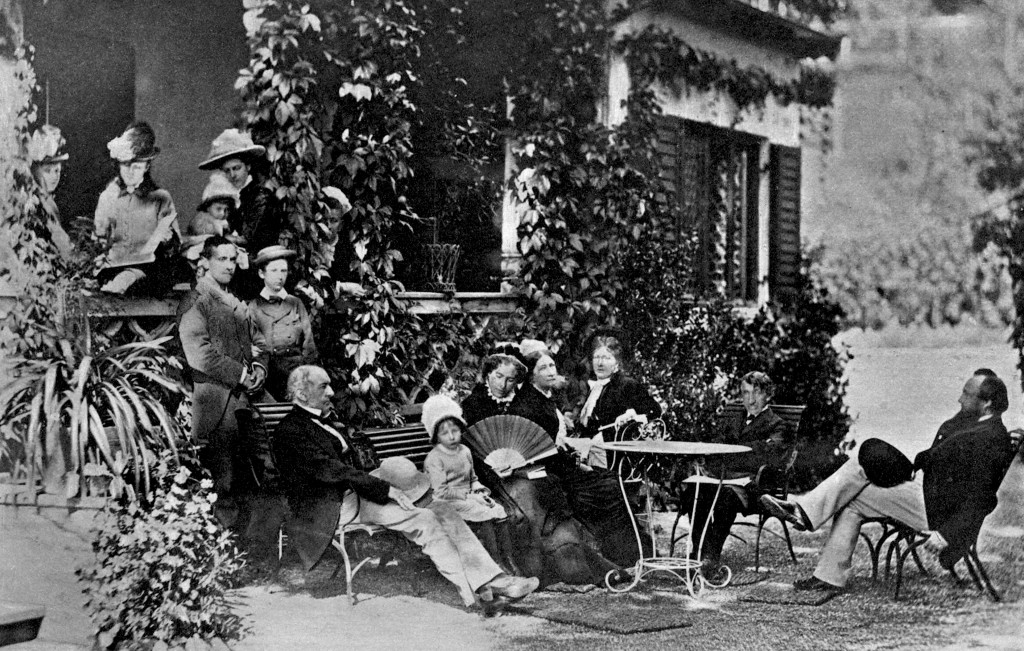 Lord Acton (seated far right) was a good friend of British Prime Minister William Gladstone (seated far left) who, with his family, visited him in 1879 at his chalet by Tegernsee in Bavaria. Photo: Karl Hahn.

Today is the birthday of the British historian Lord Acton, John Dalberg-Acton, who was born on 10 January 1834. He is one of the twenty-four conservative-liberal thinkers whose ideas and arguments I present in a forthcoming book in two volumes, to be published by the Brussels think tank New Direction. But what is Lord Acton’s relevance to us, in 2021? I would suggest that this erudite and cosmopolitan catholic liberal offers us three profound insights.

First, Acton’s account of liberty is firmly based on history and morality, not derived from any utopian fantasies. For him, liberty is first and foremost ‘the assurance that every man shall be protected in doing what he believes his duty against the influence of authority and majorities, custom and opinion. The State is competent to assign duties and draw the line between good and evil only in its immediate sphere. Beyond the limits of things necessary for its well-being, it can only give indirect help to fight the battle of life by promoting the influences which prevail against temptation,—religion, education, and the distribution of wealth.’ Although Acton never completed his planned comprehensive history of freedom, he left behind perceptive lectures in which he traced modern freedom to natural law, developed by the Ancients, to representive government, contributed by the German tribes, and to two Christian ideals, the emancipation of slaves and the freedom of conscience. Freedom is not about economic gain according to him, but rather about the protected domains individuals need to enjoy their rights and fulfil their duties.

In the second place, Acton emphasises that it is liberty, and not democracy, which is the ultimate political end. He is in favour of democracy, but it should not be taken to mean unlimited majority power. That would be its corruption: ‘The true democratic principle, that none shall have power over the people, is taken to mean that none shall be able to restrain or to elude its power. The true democratic principle, that the people shall not be made to do what it does not like, is taken to mean that it shall never be required to tolerate what it does not like. The true democratic principle, that every man’s free will shall be as unfettered as possible, is taken to mean that the free will of the collective people shall be fettered in nothing.’ In a free society, Acton thinks, people should be able to pursue their own goals instead of being compelled to march to one tune and in one direction. In a free society, they are citizens, not conscripts: ‘Whenever a single definite object is made the supreme end of the State, be it the advantage of a class, the safety or the power of the country, the greatest happiness of the greatest number, or the support of any speculative idea, the State becomes for the time inevitably absolute. Liberty alone demands for its realisation the limitation of the public authority, for liberty is the only object which benefits all alike, and provokes no sincere opposition.’

Thirdly, as a historian Acton strongly rejects the doctrine that might is right, and that crimes are somehow excusable if committed by men in high office. Unlike Hitler, for example, another mass murderer, Stalin, may have eluded the just verdict of his contemporaries, and died in his sleep, but he should not be allowed to escape the censure of history. ‘Historic responsibility has to make up for the want of legal responsibility. Power tends to corrupt and absolute power corrupts absolutely. Great men are almost always bad men, even when they exercise influence and not authority: still more when you superadd the tendency or the certainty of corruption by authority. There is no worse heresy than that the office sanctifies the holder of it.’ Acton adds: ‘The inflexible integrity of the moral code is, to me, the secret of the authority, the dignity, the utility of history. If we may debase the currency for the sake of genius, or success, or rank, or reputation, we may debase it for the sake of a man’s influence, of his religion, of his party, of the good cause which prospers by his credit and suffers by his disgrace. Then history ceases to be a science, an arbiter of controversy, a guide of the wanderer, the upholder of that moral standard which the powers of earth, and religion itself, tend constantly to depress.’ Or, as Elie Wiesel once observed, if we forget the victims, then they are being killed a second time.

(Gissurarson’s column in The Conservative, 10 January 2021.)