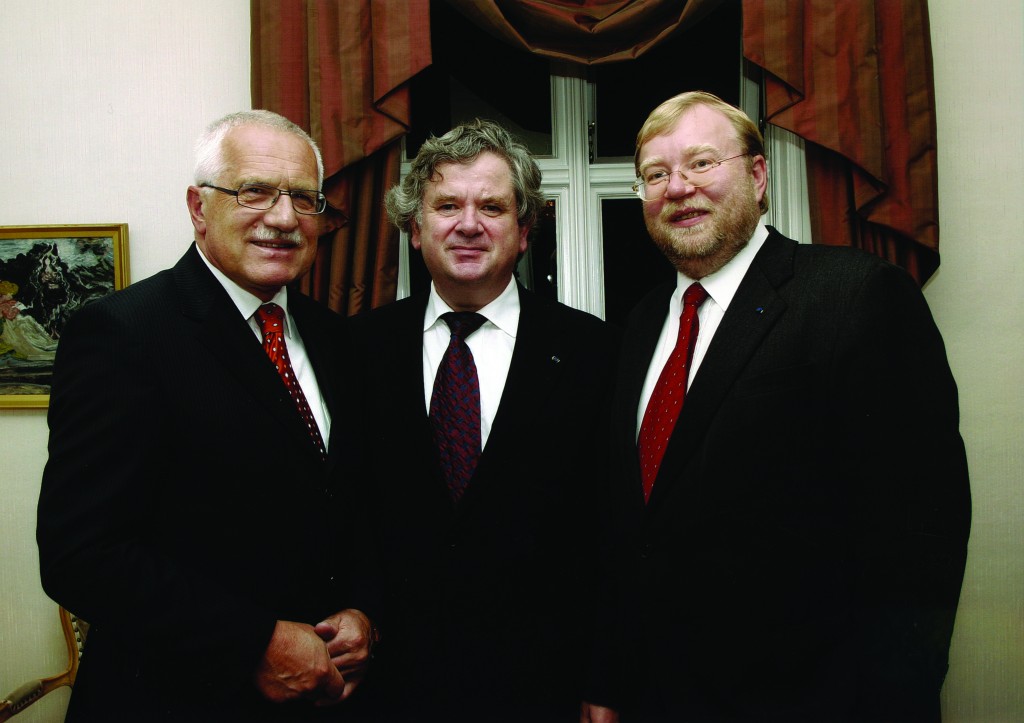 Today is the birthday of David Oddsson: he was born on 17 January 1948. David (as he is always called: the Icelanders do not really have patronymics, Oddsson just means that he is son of Oddur) has served longest of all as Iceland’s Prime Minister, both continuously and for total number of days, from the spring of 1991 to the autumn of 2004, having previously been Mayor of Reykjavik for nine years. His story is indeed remarkable. He was born out of wedlock, and his single mother struggled to bring him up on her own although she received some help both from her father and from David’s father both of whom were physicians. David was only a teenager when he had to provide for himself, working part-time or even full-time while he attended grammar school and university.

It was in Reykjavik Grammar School—a venerable old institution that had educated the Icelandic elite for centuries—that two of David’s abilities manifested themselves: his talent for acting and his skill as a political leader. He gave such a star performance in a school play that it was recorded by Icelandic television and broadcast to the whole nation. Subsequently, he was elected President of the Students’ Union where he, in the midst of the left-wing wave in the late 1960s, turned out to be a resolute anti-communist. While he pursued his university studies, established a family and earned a living as a journalist, he conducted, with two of his friends, a comic radio show where he poked fun at the Icelandic powers to be, including his conservative friends. Witty, popular, lively and sometimes audacious, with a mop of black hair, and not always elegantly dressed, he certainly did not look like a typical young conservative.

The Oddsson period in Icelandic politics between 1991 and 2004 was one of comprehensive economic liberalisation. David’s first step was to abolish the many public funds previous prime ministers had kept, ostensibly to encourage economic growth, but in reality to buy votes. The new Prime Minister made clear that loss-making enterprises had either to reorganise themselves or go under. This brought about a great change for the better in the mindset of Icelandic businessmen. With the support of his loyal and like-minded Finance Minister, Fridrik Sophusson, also from the Independence Party, he turned the fiscal deficit into a surplus which was used to reduce the public debt. Proceeds from the extensive privatisation of government enterprises over the next decade were also used for the same purpose. As a consequence, the public debt almost disappeared. By monetary constraint, including a ban on any government overdraft in the Central Bank of Iceland, the previously persistent inflation was kept at the same low level as in countries nearby. It helped that David nurtured good relations with labour leaders who were not as militant as their predecessors (some of whom had been communists receiving financial support from the Soviet Union). In foreign affairs he was a staunch ally of the Americans and became a good friend of the two Bushes and of President Clinton. Soon after David formed his first government, he decided, in August 1991, encouraged by the strongly anti-communist Foreign Minister, Jon B. Hannibalsson of the Social Democrats, that Iceland should be the first country to resume full diplomatic ties with the three Baltic republics which had been occupied by the Soviets (and briefly by the Nazis) since 1940.

The Oddsson governments continued reforms which had already begun in two important economic sectors. The system of individual transferable quotas, ITQs, in the fisheries was not only maintained, but also improved in some details, making the Icelandic fisheries both sustainable and profitable. Indeed, the only problem in this sector seemed to be that most owners of fishing firms were making profits, thus causing some resentment, especially amongst intellectuals. The pension system was also reformed, by strengthening the professional pension funds and by allowing private pension accounts, with the result that the Icelandic pension funds have become some of the strongest in the world. In 2004, poverty among the elderly was nowhere at a lower level than in Iceland, according to international measurements. Contrary to the claims of left-wing intellectuals, the economic liberalisation did not make income distribution less equal than in the other Nordic countries: in 2004 it was more equal than in Norway and Finland and slightly less equal than in Sweden and Norway. But perhaps the most radical step taken by the Oddsson governments was a series of tax cuts. The corporate income tax was reduced from 50 per cent in 1990 to 18 per cent in 2001, but the revenue from it nevertheless increased, in a stunning confirmation of the ‘Laffer Effect’. A turnover tax on business was abolished, and so was the wealth tax. The personal income tax was also reduced and simplified, and the inheritance tax was significantly lowered, not going over 5 per cent in most cases. Border taxes, such as customs, were greatly lowered, and Iceland gained access to the European internal market in 1994 when she joined the European Economic Area, EEA.

When Oddsson left politics in the autumn of 2005, it was not because of any pressure from his party or the coalition partner. It was because he had long ago decided to leave politics when he felt his time was up. It also contributed to his decision that in the summer of 2004 he had successfully battled a bout of cancer. But when he was appointed Governor of the Central Bank of Iceland, CBI, in October 2005, he was faced with yet another challenge. In the very success of the economic liberalisation of the Oddsson Era, the seeds of failure were hidden. Iceland has gained such a good reputation for fiscal rectitude, monetary constraint and rapid growth that when the newly-privatised banks in 2003 started operating in the international financial markets, they found themselves with easy access to cheap credit. The favourable credit ratings of the Icelandic Treasury led to equally favourable credit ratings for the Icelandic banks. The young and ambitious managers of the three main banks started expanding wildly, doubling in size both in 2004 and 2005. David was deeply apprehensive about this expansion although he had to be careful in his public utterances. I should know because I was Member of the CBI Board of Overseers in 2001–2009 and I often listened privately to his words of caution, sometimes thinking that he was exaggerating.

David was not exaggerating. Because of their rapid expansion, the Icelandic banks became highly vulnerable in the international credit crunch which started in the autumn of 2007. It was clear that the CBI and the Icelandic Treasury could not on their own provide them with sufficient liquidity. The CBI could print kronur, the Icelandic currency, but not euros, dollars, or pounds. David went to the central banks of Europe and the United States and asked for currency swap deals, so that the CBI could provide liquidity in foreign currency to the Icelandic banks, but he was turned down everywhere. Meanwhile however the US Federal Reserve Board made dollar swap deals with the three Scandinavian countries. It became obvious that Iceland was being left out in the cold. Perhaps the Icelandic banking sector might nevertheless have survived, or at least managed an orderly retreat, if in the beginning of October 2008 the British Labour government had not suddenly closed down the two Icelandic-owned British banks (at the same time as it rescued all other banks in the United Kingdom) and invoked an anti-terrorist law against one of the Icelandic banks as well as against the CBI and the Icelandic Treasury. This turned a crisis into a collapse. In a report that I was commissioned to do for the Icelandic Treasury I suggest that the reason for this unnecessary and unprecedented brutality was the political interest the two leading members of the British government, Prime Minister Gordon Brown and Chancellor Alistair Darling, had in demonstrating to their Scottish voters that monetary independence could be perilous. While the Icelandic banking sector was in 2008 eight times the gross domestic product, GDP, of Iceland, the Scottish banking sector was then twelve times the GDP of Scotland and would not have survived without assistance from the Bank of England. Whereas the two Icelandic-owned banks that were closed down and put into resolution turned out to be fully solvent, the Royal Bank of Scotland, RBS, rescued by Brown and Darling, is still tottering.

In the midst of the collapse, David as CBI Governor was adamant, against many others, that the Icelandic state should limit its financial liabilities, such as guarantees of bank deposits. Iceland had to be fenced off, he said. Fortunately, his advice was taken and the parliament passed a law which gave depositors, foreign as well as domestic, priority claims to the estates of the fallen banks, while the Treasury did not assume legal responsibility for deposits, neither in the domestic nor foreign branches of the banks. It is perhaps the best criterion of the success of the Oddsson liberal reforms that the Icelandic economy was strong enough to withstand the heavy blow from the bank collapse. Iceland has recovered rapidly. Although David’s firmness of purpose and decisiveness during the bank collapse was perhaps his finest hour, predictably the Icelandic Left tried to make him a scapegoat for the debacle. They succeeded in driving him out of his position at the CBI in 2009, but he was then hired as the editor of Iceland’s leading daily, Morgunbladid, where he is still going strong, actively and sometimes controversially engaging in the matters of the day. But what is the key to his many successes despite all the challenges, not least during the bank collapse? I think that Machiavelli provides the answer. An effective politician has to have both the courage of the lion and the cunning of the fox, and David has both. An early indication of how he combines these two qualities is perhaps how already in grammar school he revealed both his talent for acting and his political skill.

(Gissurarson’s column in The Conservative 17 January 2021.)