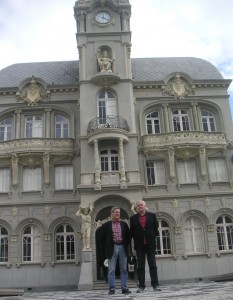 The argument for individual freedom is greatly strengthened by various data and statistics available on the internet, Professor Hannes H. Gissurarson said in a lecture at a conference on “Liberty in the Information Age” in Curitiba in Brazil 31 May 2014. The conference was organised by the Brazilian Students for Liberty, Estudantes pela liberdade, and co-sponsored by the American Language of Liberty Institute and by the German Friedrich Naumann Stiftung. In this context, Professor Gissurarson mentioned the websites of research institutes such as Cato Institute and Heritage Foundation, and of international associations such as the World Bank, the International Monetary Fund and many UN organisations, and also internet data banks such as the Index of Economic Freedom and Angus Maddison’s historical figures. Of liberal bloggers and commentators two stood out, according to Professor Gissurarson, English science writer Matt Ridley and Scottish historian Niall Ferguson, always offering fresh insights. In his presentation, Professor Gissurarson showed in graphs with data from Angus Maddison the traditional comparisons between West Germany and East Germany and between South and North Korea: the same nation performing differently in two areas as a result of different economic institutions. He also compared some regions which could be regarded as comparable, such as the “Nordic” provinces of Canada (Manitoba) and states of the US (Minnesota and Southern Dakota, discounting North Dakota because of its oil wealth) on the one hand and the Nordic countries on the other hand (Sweden, Denmark, Finland and Iceland, discounting Norway because of its oil wealth). It turned out that the North American Nordic people enjoyed significantly higher living standards than the European Nordic people. Another interesting comparison was between economic development in Australia and Argentina—two countries with almost identical living standards in 1929, before the Great Depression, both populated by immigrants of Caucasian origin and both with similar natural resources. Presently, however, Argentina was lagging far behind Australia. A comparison could also be made between the economic development of Singapore and Jamaica—two small tropical islands and former British colonies. For a while, Jamaica had a larger GDP per capita than Singapore, whereas Singapore made much greater progress after independence, in the last fifty years, the difference being that the Singapore economy was one of the freest in the world.

Professor Gissurarson’s lecture formed a part of the joint research project by RNH and AECR, the Alliance of European Conservatives and Reformists, on “Europe, Iceland and the Future of Capitalism”. Here is his graph on the comparison between Singapore and Jamaica: