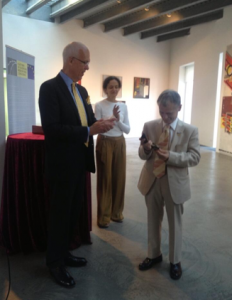 From left: Göran Lindblad, Neela Winkelmann and Mustafa Dzhemilev at the Kampa Museum.

Mustafa Dzhemilev, leader of the Crimean Tatars, was awarded the prize of the Platform of European Memory and Conscience at a conference in Prague 12 June 2014. Göran Lindblad, former MEP from Sweden and chairman of the Platform, gave him the prize at a ceremony in the Kampa Museum of Art. On this occasion, Dzhemilev briefly described the fate of his nation, heavily oppressed in the first decades of communist rule, then forcibly moved on Stalin’s order in 1944 from their ancient homeland in the Crimea to labour camps in Siberia and Uzbekistan and only allowed to return after 1967. Long a Soviet dissident and frequently imprisoned, Dzhemilev is today barred from entering the Crimea, after its Russian occupation. Communism was a totalitarian ideology no less than National Socialism, Dzhemilev said in his acceptance speech. It was very important, indeed crucial, he added, that the European democracies continued morally to support the oppressed nations of the East. He vowed to fight on for the Crimean Tatars, but without any use of violence.

The conference itself, on the “Legacy of Totalitarianism Today”, took place 12–13 June in the Czech Senate building, the former Waldstein Palace, and was hosted by Senate Vice-President Ms. Miluše Horská under the auspices of Czech Minister of Culture Mr. Daniel Herman. It was organised by Ms. Neela Winkelmann, the Platform’s executive director. The Platform’s partners at the conference included the Konrad Adenauer Stiftung and the Visegrad Fund. The keynote speech was given by award-winning writer Sofi Oksanen who talked about memories of totalitarianism in Central and Eastern Europe. The acclaimed 2008 documentary The Soviet Story by Latvian historian and film director Mr. Edvīns Šnore was also screened, Mr. Šnore discussing it afterwards with the audience. Speakers at the conference included Mr. Vytautas Landsbergis, former President of Lithuania, Mr. Tunne Kelam, Estonian MEP, and Professor Stéphane Courtois, the French editor of the Black Book of Communism. RNH was represented at the conference by Professor Hannes H. Gissurarson who moderated a panel on the European Union and the reconciliation of East and West. His attendance formed a part of the joint RNH and AECR project on “Europe of the Victims”. The conference passed a resolution on worrying trends in Eastern Europe, in particular the Russian annexation of the Crimea.