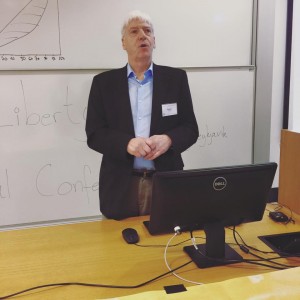 The regional meeting of the European Students for Liberty, ESFL, which took place in Reykjavik Saturday 3 October 2015 was well-attended and very successful. Attendees included not only university students, but also many from senior high schools or grammar schools in the Reykjavik region. RNH supported the conference in various ways. The Chairman of RNH’s Academic Council, Professor Ragnar Arnason, spoke on free markets and property rights. RNH’s Director of Academic Studies, Professor Hannes H. Gissurarson, held a reception at his home for the foreign guests. Gisli Hauksson, RNH’s Chairman of the Board, organised a reception hosted by Gamma, a rapidly growing fund management company. The participation of RNH in the conference forms a part of the joint project with AECR, Alliance of European Conservatives and Reformists, on “Europe, Iceland and the Future of Capitalism”. Other speakers at the conference were business affairs reporter Asgeir Ingvarsson who spoke on the impact of immigration on income distribution, Icelandic MP Sigridur Andersen who discussed the relationship between politics and ideals, Roderick T. Long, Philosophy Professor at Auburn University, who described “left-wing liberalism” or the alliance of libertarians and radical leftists, both of whom are sceptical of government and hierarchies, and investor Heidar Gudjonsson, who analysed public debt in Western democracies and traced its accumulation, unsustainable in some countries, to the government monopoly of producing money. While the attendees at the conference disagreed on many issues, they generally welcomed the fresh and innovative ideas put forward there. The conference was moderated by Lukas Schweiger, originally from Austria, but residing at present in Iceland, and Eyd Aradottir from the Faroe Islands, now residing in Denmark. The conference was taped by the Sons of Libertas, and parts of it, as well as interviews with some speakers, will be included in a documentary produced by the SoL.