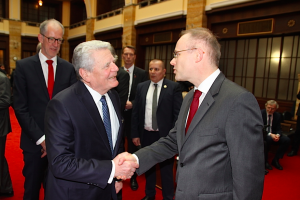 RNH is a member institute of the Platform of European Memory and Conscience which seeks to keep alive the memory of victims of communism and other European totalitarian movements. Monday 26 March 2018 the Platform was the co-sponsor, with the Ján Langoš Foundation in Bratislava in Slovakia, in giving an award to Joachim Gauck, President of Germany 2012–2017 and previously Federal Commissioner for the Records of  Stasi, the secret police in the Soviet-occupied part of Germany (East Germany). Gauck received the award for his courageous fight against totalitarianism both before and after the fall of the Berlin Wall. Ján Langoš, after whom the award is named, was a Slovakian dissident in the communist era, Interior Minister in Czechoslovakia in 1990–1992 and the director of the National Memory Institute in Slovakia from 2003. He died in a car accident in 2006 on his way to a trial where he was to testify against former secret police agents. Other recipients of the award include Dalai Lama, leader of the Tibetan liberation movement, Václav Havel, former President of Czechoslovakia, and Sandra Kalniete, MEP for Latvia.