Europe, Iceland and the Future of Capitalism

Jointly, RNH and AECR, the Alliance of European Conservatives and Reformists, organise a series of lectures at the University of Iceland and elsewhere, some of which will eventually be published. Icelandic and foreign scholars and writers discuss Iceland’s place in Europe after the international financial crisis of 2007–8: Is capitalism to blame for the crisis? Or misguided government intervention? If capitalism is about “creative destruction”, how can the creative side of it be encouraged? Should Iceland join the European Union? What is the historical nature and significance of socialism, not only national socialism or Nazism, but also the socialism practised in the Soviet Union and its satellite states? Partly, the lecture series is a response to a recent lecture series at the University of Iceland organised by left-wing personalities against “neo-liberalism”, resulting in a collection of essays under the name Eilifdarvelin. Uppgjor vid nyfrjalshyggjuna (The Perpetual Motion Machine. The Anatomy of Neo-liberalism). 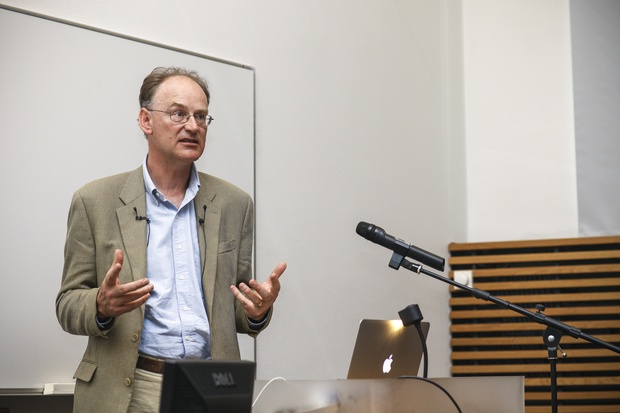 In the first year, the first speaker in the series was the English best-selling writer Dr. Matt Ridley 27 July 2012 who spoke about the reasons for being optimistic about the future. The next speaker was Dr. Michael Walker of the Canadian Fraser Institute 17 September 2012, on the international index of economic freedom for 2010: Under the 2009–2013 left-wing government, economic freedom in Iceland decreased significantly. Then six speakers and several commentators participated in an international conference on “Fisheries: sustainable and profitable” 6 October 2012: Professors Thrainn Eggertsson and Ragnar Arnason of the University of Iceland, Professor Rognvaldur Hannesson of the Norwegian School of Business Administration, Arni Mathiesen, Director of the Fisheries Department at FAO, Dr. Gunnar Haraldsson, Senior Fisheries Expert at the OECD, and Michael Arbuckle, Senior Fisheries Expert at the World Bank. Also, Dr. Asgeir Jonsson, Assistant Professor at the University of Iceland, and Dr. Michael De Alessi were commentators.

The next speakers in the series were: RNH Academic Director, Professor Hannes H. Gissurarson, of the University of Iceland 9 October 2012 on “Poverty in Iceland, 1995–2004”; Norwegian journalist Jan-Arild Snoen 15 October 2012 on the media bias in Europe against the US; Professor Douglas Rasmussen, of St. John’s University, New York, 26 October 2012 on Ayn Rand’s message for the 21st Century, on the occasion of the publication of an Icelandic translation of Atlas Shrugged by Rand; Mats Persson of Open Europe 12 November 2012, about trends in Europe; Dr. Daniel Mitchell of Cato Institute, Washington DC, 16 November 2012, on the case for the flat tax; Professor Hannes H. Gissurarson 17 November 2012, on “Churchill as a Statesman”; and Kate Hoey, MP for the London district of Vauxhall, 19 November 2012, on “The Dangers of joining the EU”. 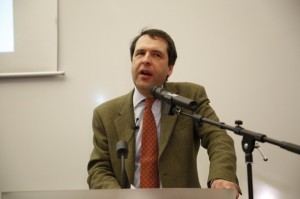 In the second year, the first speaker in the series was Dr. Nils Karlson of Ratio Institute in Stockholm who described 14 January 2013 “The New Swedish Model”. The second speaker was Professor Hannes H. Gissurarson 19 February 2013 on “Liberty, Crisis and Capitalism”. He was followed by Professor Phil Booth 13 March 2013 on the “Causes of the Financial Crisis”, and Marta Andreasen, former Chief Accounting Officer and Budget Execution Director at the European Commission, 30 August 2013 on “Holding the EU to Account”. Matthew Elliott from the British Taxpayers’ Union talked 20 September 2013 about how the Icelanders could fight the encroachment of the state. 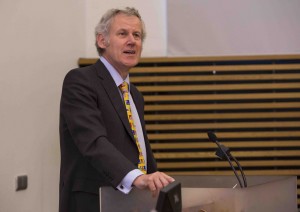 Precisely five years after the 2008 bank collapse, 7 October 2013, RNH organised an international conference in Reykjavik on the 2007–2009 financial crisis and the Icelandic case, with papers given by Dr. Eamonn Butler from the Adam Smith Institute and Dr. Pythagoras Petratos from the Said School of Business at Oxford University and Dr. Asgeir Jonsson and Professor Hannes H. Gissurarson from the University of Iceland. On 13 october 2013, the late Mrs. Margaret Thatcher’s birthday, her senior adviser John O’Sullivan gave a talk on “The Real Iron Lady”. On 14 October 2013, RNH organised an international conference on “the quota system and a special tax on fisheries”, with Professor Ralph Townsend of the University of Maine making the case for self-governance in fisheries, Professor Ragnar Arnason arguing against a special tax on the Icelandic fisheries, Dr. Gunnar Haraldsson, director of the Economic Research Institute of the University of Iceland, discussing the CFP, Common Fisheries Policy, of the EU, and Professor Hannes H. Gissurarson analysing moral and political arguments for the initial allocation of property rights to natural resources.

The next speakers in the project were Jon Steinar Gunnlaugsson, former Supreme Court Judge, and Helgi A. Gretarsson, Associate Professor of Law at the University of Iceland, who debated 29 October 2013 whether or not the special tax on the Icelandic fisheries is constitutional. Then, Dr. Daniel Mitchell of Cato Institute shared his thoughts 4 November 2013 on how to starve the beast, the modern Leviathan. The academic director of RNH, Professor Hannes H. Gissurarson, also kept a busy schedule in Iceland and abroad in 2013, giving lectures in Porto Alegre 9 April 2013, Bifrost 3 May, Vilnius 12 September, Cambridge 22 September, Stockholm 29 October and Budapest 15 November on the international financial crisis and the Icelandic bank collapse. 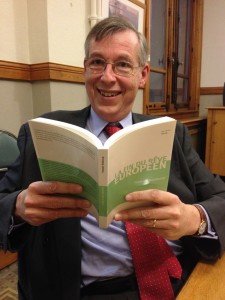 The project continued in 2014. The English writer and commentator on current affairs, Dr. Richard North, 30 January 2014 explored choices facing the United Kingdom upon possibly leaving the EU, one of them being membership in the EEA, European Economic Area, with Norway, Iceland and Liechtenstein. One of Europe’s most distinguished experts on collective security, François Heisbourg, discussed 5 April 2014 whether the euro would bring the EU down, requiring much tighter integration than the European countries were prepared for. Professor Hannes H. Gissurarson read papers on various aspects of the 2008 Icelandic bank collapse in Reykjavik 14 March 2014, in Berlin 15 March, in Torshavn in the Faroe Islands 22 March and in Las Vegas 14 April. He also lectured on Liberty and the Internet in Porto Alegre in Brazil 25 May and in Curitiba 31 May. 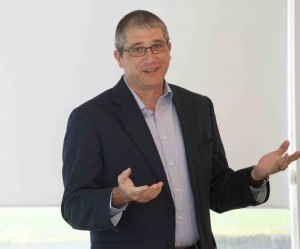 In July 2014, a century had passed since the outbreak of the First World War, which almost led to the collapse of the liberal order. On 28 July 2014, Professor Robert Lawson, one of the authors of the Index of Economic Freedom, spoke on the problems and results of measuring economic freedom. In the summer, autumn an early winter of 2014, Professor Hannes H. Gissurarson gave several papers in Iceland and abroad, sponsored by RNH: 12–15 August, he read three papers at the annual meeting of NOPSA, the Nordic Political Science Association, in Gothenburg in Sweden, on the 2008–2013 Icesave dispute, on the 2008 Icelandic bank collapse, and on the Icelandic welfare state; 10 October he read a paper on how to develop F. A. Hayek’s theory of spontaneous evolution at an international conference of the Economic Freedom Institute at Manhattanville College in New York; 18 October he gave a talk criticizing Thomas Piketty’s theory of income distribution at an international conference of the European Students for Liberty in Bergen in Norway; 31 October he read a paper at a conference in Reykjavik on possible explanations for the hostility of the British government towards Iceland during the 2008 financial crisis; 27 November he lectured at the Institute of Economic Affairs in London on the topic: “Why was Iceland left out in the cold? And kept there?”

On 30 October 2014, when the Public Book Club published a translation of Matt Ridley’s The Rational Optimist, Ridley visited Iceland and gave a talk. On that occasion, Professor Thrainn Eggertsson discussed Ridley’s point of view and Professor Birgir Thor Runolfsson analysed an example of the rational management of natural resources: the system of ITQs (individual transferable quotas) in the Icelandic fisheries. RNH was one of the sponsors of an international conference 15 November 2014 organised by the European Students for Liberty. Two members of the RNH Academic Council spoke, Professor Birgir Thor Runolfsson on the Icelandic Commonwealth and Professor Hannes H. Gissurarson on Piketty’s theory of capital in the 21st century. RNH also continued to promote the works of Ayn Rand: Professor Tara Smith gave a lecture 24 November on Rand’s moral theory, in particular her account of the liberating force of money. 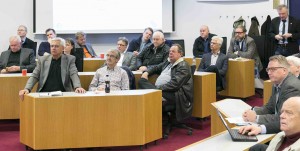 The project continued in 2015. Professor Gudni Johannesson of the University of Iceland and Professor Hannes H. Gissurarson spoke 14 January 2015 at an RNH seminar in Reykjavik on “New Evidence on the Bank Collapse”. Professor Gissurarson read several papers to conferences in early 2015: 9 april he gave a talk on Swedish-Icelandic relationships 9 April 2015 to a breakfast meeting at the think tank Ratio in Stockholm in Sweden; 11 April he provided personal recollections of three modern masters, Friedrich A. von Hayek, Karl R. Popper and Milton Friedman, at the annual conference of the European Students for Liberty in Berlin in Germany; 21 April, he spoke about the sometimes misguided sale of Icelandic assets abroad after the 2008 bank collapse 21 April 2015 at a conference of the Institute of Business Research at the University of Iceland; 30 April, he gave a talk on Piketty’s  challenge to capitalism at the Business School in Tallinn.