Taxation and Distribution of Income

One of the main focuses of RNH, The Icelandic Research Centre for Innovation and Economic Growth, is taxation and the distribution of income in the context of a European welfare state. Research topics include:

Professor Ragnar Arnason is editing a forthcoming study of taxation and distribution of income, which will be published by Almenna bokafelagid. The free market institute RSE is supporting this project. 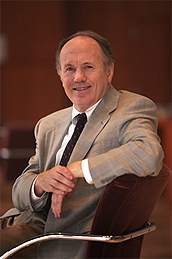 In 2007–2009, Professor Hannes H. Gissurarson directed, for the Icelandic Ministry of Finance, a research project into the impact of tax reductions, not least on welfare provisions and the distribution of income. In connection with the projects, several scholars and writers visited Iceland to do research, lecture and advise, including Nobel Laureate Edward C. Prescott, Professor Arthur Laffer, Irish economist Professor Brendan Walsh, Dr. Daniel Mitchell of Cato Institute, Washington DC, Swiss economist Pierre Bessard of Liberal Institute, Geneva and Zurich, and French economic journalist Henri Lepage. The project resulted in several reports and papers, and two books, Cutting Taxes to Increase Prosperity in 2007, by several authors, and Ahrif skattahaekkana a hagvoxt og lifskjor (The Impact of Tax Reductions on Economic Growth and Living Standards) by Hannes H. Gissurarson.

Every day of the month, on its homepage RNH will publish a graph, and a comment on it, relevant to its research areas: on tax rates and tax revenues in Iceland, on distribution of income in Iceland, on the consequences of liberal reform in Iceland, on the connection between economic freedom and living standards, etc. The graph, based on data derived from official sources, will be free for anyone to download and use.