Tszwai So Gets First Prize in Platform Competition 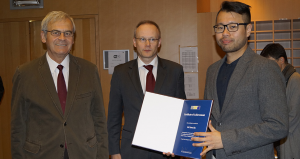 Designer Tszwai So from Spheron Architects in the United Kingdom received first prize in a competition of the Platform of European Memory and Conscience on proposals for a memorial for the victims of totalitarianism to be erected at the Place Jean Rey, in the heart of the European district of Brussels. This was announced at a meeting of the Platform 24 April 2018 in Brussels where RNH Academic Director Professor Hannes H. Gissurarson was present. Attending the meeting were MEPs László Tökés from Romania, who hosted it, Milan Zver from Slovenia and Petras Auštrevičius from Lithuania, as well as representatives of the embassies of Poland, Lithuania and the Czech Republic to the EU. So’s proposal was that the square would be turned into a kind of an historical post office, with letters from prisoners in totalitarian countries.