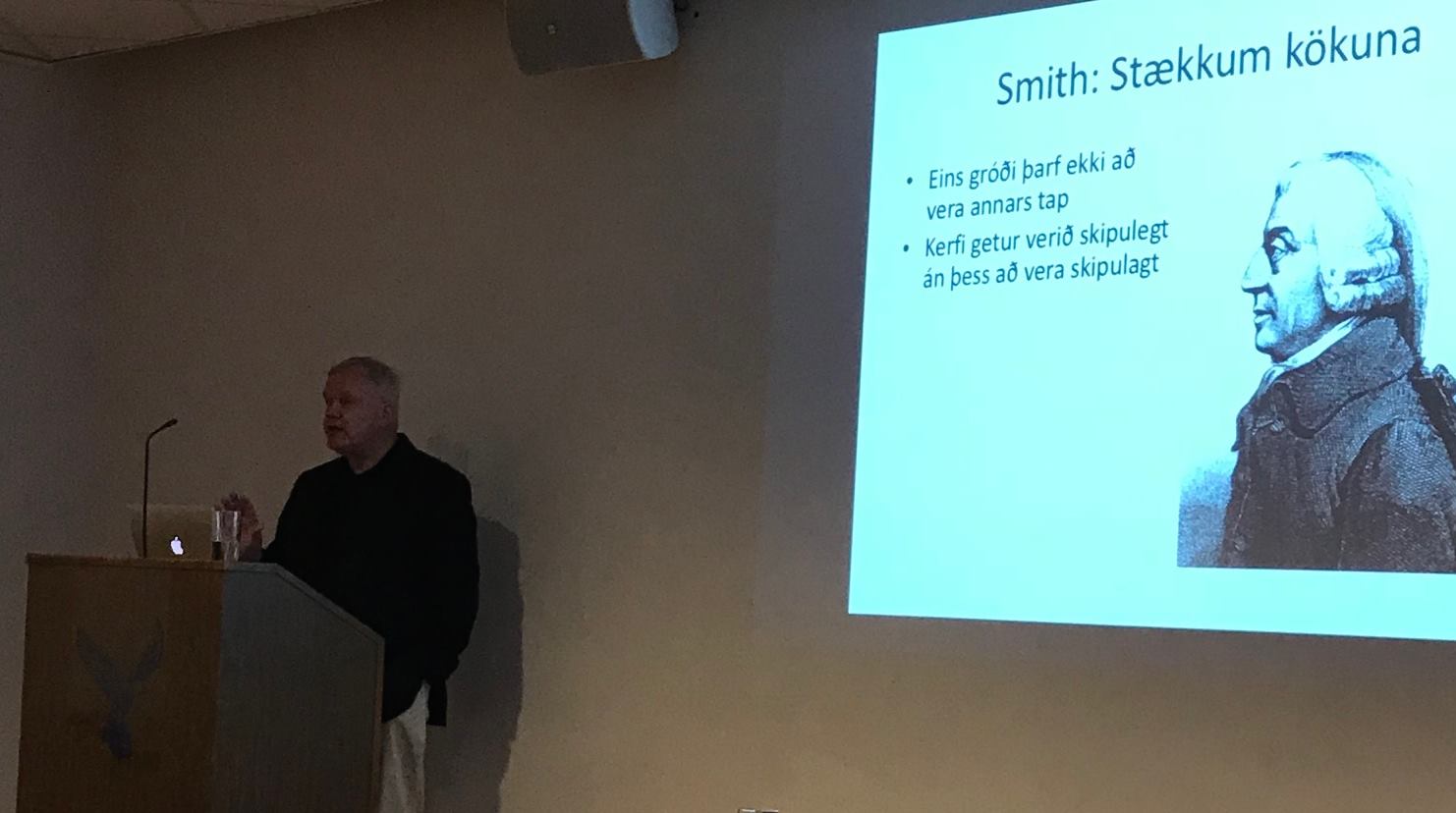 Gissurarson gives his talk at the leadership course.

RNH Academic Director, Professor Hannes H. Gissurarson, gave a talk about classical liberalism or libertarianism at a leadership course of the European Students for Liberty, for students in grammar schools, senior high schools and colleges, Saturday 13 January 2018 in Kopavogur. The course was organised by  Sigurvin Jarl Ármannsson and Magnús Örn Gunnarsson and the other speakers were public relations expert Gisli F. Valdorsson and independent investor Gunnlaugur Jonsson. Gissurarson said that there was no one liberalism: each liberal followed his own liberalism. In some ways however liberalism was simply derived from common sense, expressed in popular sayings like that of the Icelandic farmer Einar from Thvera who had observed in early 11th Century that there was a difference between kings, some being good and others bad, and that therefore it was most prudent to do without kings. Gissurarson also recalled the famous words by whaler Loftur Bjarnason: “I can sleep at night, although others do well.”

Gissurarson added that the two historical pillars of classical liberalism were the call by John Locke for constraints on government and the analysis by Adam Smith of a spontaneous order. Modern liberalism was supported by five schools of thought. The Austrian economists, Hayek and Mises, pointed out that the dispersal of knowledge required the dispersal of power and that competition was a discovery process. The Chicago economists, Friedman, Stigler, Becker and Coase, taught that pricing was often superior to taxing. The Virginia economists, Buchanan and Tullock, revived the old working hypothesis that individuals were mostly concerned with their own interests, in politics as well as in business. Fourthly, liberalism was supported by philosophers such as Karl R. Popper who expounded ‘negative utilitarianism’ which consisted in minimising social evils (of which men had clear ideas) instead of maximising happiness (an elusive concept) and Robert Nozick who argued for a minimal state and income distribution by choice. Fifthly, best-selling author Ayn Rand expressed radical individualism in her novels, three of which had been published in Icelandic, Atlas Shrugged, The Fountainhead and We the Living.

Gissurarson’s talk at the course in Kopavogur formed a part of the joint project by RNH and ACRE, the Alliance of Conservatives and Reformists in Europe, on “Europe, Iceland and the Future of Capitalism.’