Professor Hannes H. Gissurarson, member of the RNH Academic Council, gave a talk at a meeting of the Association of Retired University of Iceland Employees 13 February 2013. The title was “Personal Recollections of Four Modern Masters”. There, Professor Gissurarson described his relations with four leading intellectuals of the last century, Friedrich A. von Hayek, Karl Popper, Milton Friedman and James M. Buchanan. As a young University student, Gissurarson organised visits to Iceland by three of them, Nobel Laureates Hayek, Friedman and Buchanan; he also spent a whole day with Popper in his house in Penn, Buckinghamshire, in January 1985, discussing with him ideas and individuals. The influence of these four thinkers can hardly be underestimated. In the 20th century, many politicians, economists and other intellectuals had to make up their mind whether they followed Hayek or John Maynard Keynes in how to conceive of the economic system and to conduct economic policy. Similarly, in modern philosophy Popper and another Austrian philosopher, Ludwig Wittgenstein have often been regarded as the main rivals. 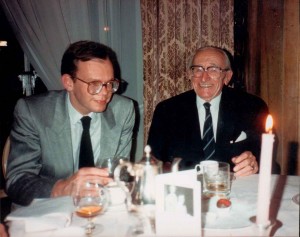 Gissurarson with Hayek at the Ritz in London in 1985.

After Gissurarson and some like-minded young people had founded the Libertarian Association on Hayek’s 80th birthday 8 May 1979, Hayek accepted their invitation to visit Iceland. He gave two papers, one at the University of Iceland on Monetary Order, the other one at a meeting of the Libertarian Association on the “Muddle of the Middle”. During his Iceland visit, Hayek invited Gissurarson to attend the Stanford meeting of the Mont Pelerin Society in the autumn of 1980, and in 1984 Gissurarson, then a postgraduate student at the University of Oxford, was elected member of the Society. In the next few years, Gissurarson and Hayek met many times. For example, Gissurarson attended a reception for Hayek, hosted by Richard von Weizsacker, then Mayor of Berlin (and later President of Germany), in the Charlottenburg Palace in 1982, and a reception for Hayek, hosted by Jacques Chirac, then Mayor of Paris (and later President of France), at the Hotel de Ville 1984. Gissurarson showed the audience photographs from those and other occasions. His doctoral thesis at Oxford was on Hayek, and with some friends there he founded the Hayek Society at the University of Oxford. Five Hayek Society members had a memorable dinner with Hayek in London in the spring of 1985. The 86 years old Hayek was in a very good mood, and when musicians approached the table and played the tune to “The City of My Dreams”, Hayek started singing the text in German. He also told his young audience how Mrs. Margaret Thatcher had once disarmed him, what was in his opinion the contrast between liberation and liberty, and why he was critical of the Chicago School methodology; he also compared two U. S. presidents that he had met, John F. Kennedy and Ronald Reagan. 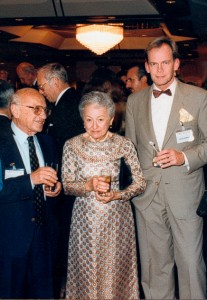 Milton and Rose Friedman with Hannes Gissurarson in Tokyo in 1988.

Gissurarson first met Milton Friedman at the Stanford meeting of the Mont Pelerin Society in 1980. When he told Friedman that he was busy defending him in Iceland, Friedman said: “You should not be defending me. You should be defending the principles that we share.” Friedman had greatly appreciated it when in early 1984 Gissurarson had, as a postgraduate Oxford student, written to an Oxford professor of statistics who had been widely quoted in British (and Icelandic) newspapers as concluding that Friedman’s statistical methods were fraudulent. The professor replied that nothing that he had said was meant to imply that Friedman had been dishonest; their disagreement was a purely theoretical one. Friedman then visited Iceland in the autumn of 1984 to give a lecture. The night before the lecture he participated in a famous debate on television with left-wing intellectuals Stefan Olafsson and Olafur Ragnar Grimsson, later President of Iceland. When Olafsson had criticized that there was a charge for attending Friedman’s lecture the next day, whereas the tradition at the University of Iceland had been that lectures by visiting scholars were free, Friedman responded that of course those lectures had not been free. The difference was solely that those who did not attend had had to pay for them, and not only those who did attend. Gissurarson also gave an account of a lunch given for Friedman in Iceland by the Minister of Trade, Matthias A. Mathiesen. Gissurarson presented the governor of Iceland’s Central Bank to Friedman with the words: “Here is a man, Professor Friedman, who would become unemployed if your theories were implemented in Iceland!“ Friedman responded with a big smile. “No, he would not become unemployed. He would only have to move to a more useful occupation.“

In his talk, Professor Gissurarson told many more stories of Hayek and Friedman, and also of Popper and Buchanan. He said that Popper and he had discussed extensively whether Popper was too lenient on Marx in his great work, The Open Society and Its Enemies. Popper told him that he had been much influenced by the descriptions of the conditions of the English working class by 19th century novelist Elisabeth Gaskell. Among the many interesting observations that Popper made during the discussion was that Iceland was the only example of a true or pure nation-state that he could think of. Gissurarson’s lecture was a part of the project “Europe, Iceland and the Future of Capitalism”, jointly organised by RNH and AECR, the Alliance of European Conservatives and Reformists.