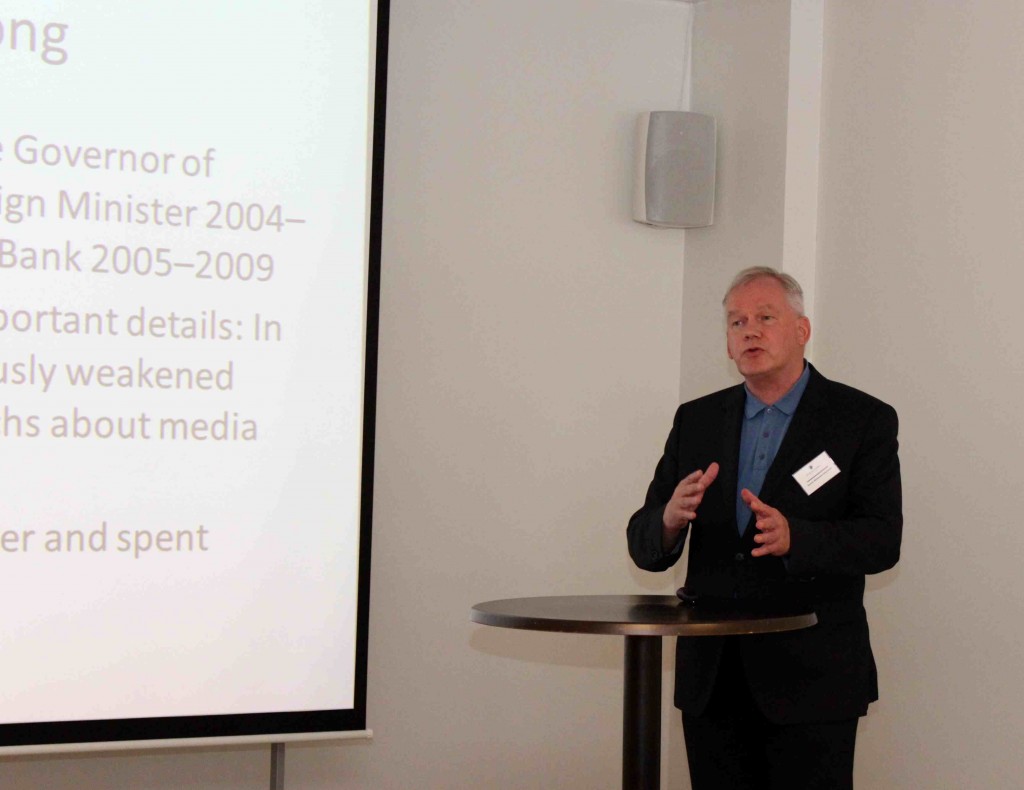 At a conference on social sciences at Bifrost University 3 May 2013, Professor Hannes H. Gissurarson gave a lecture on “The International Financial Crisis and the Collapse of the Icelandic Banks”. He rejected four common explanations for the bank collapse:

1. The banks were too big. According to Professor Gissurarson, the banks were not too big; it was Iceland which was too small. The system error was that the banks’ field of operations was the whole European Economic Area, EEA, but their field of insurance or mutual guarantees was Iceland alone. Luxembourg and Switzerland had relatively big banking sectors, like Iceland before the collapse.

2. A “neo-liberal” experiment in Iceland failed. This was what Ha-Joon Chang asserted in his book, 23 Things They Don’t Tell You About Capitalism. Professor Gissurarson pointed out that the regulatory framework  in Iceland for financial markets was identical to that in other member-states of the EEA.

3. The Icelandic bankers were reckless and incompetent. Professor Gissurarson pointed out that if so, then their creditors in foreign banks were no less incompetent. Recent examples from HSBC, Danske Bank, Barclays Bank, Royal Bank of Scotland and Deutsche Bank, showed that foreign bankers could be pretty reckless, too.

4. The Icelandic Central Bank, under the leadership of David Oddsson, had made a series of mistakes. This was what Robert Wade asserted in New Left Review and elsewhere. Professor Gissurarson pointed out many factual errors in Wade’s articles.

Professor Gissurarson argued that the main causes of the international crisis were systemic: Banks had underestimated risk, not least because of the moral hazard created by an indirect government guarantee of their liabilities, and government intervention had made matters worse, for example subprime loans in the US and the expansionary monetary policies pursued by the US Federal Reserve System after 2002. Two causes of the Icelandic bank collapse were also systemic, Professor Gissurarson said: Iceland had become too small for the banks; and an additional systemic risk had been the cross-ownership and hidden liabilities of the banks’ largest Icelandic debtors who had formed a closely-knit group; indeed, Iceland’s market capitalism of 1991–2004 had been replaced by crony capitalism in 2004–2008.

Two other contributing factors had been the ruthlessness of the UK Labour government under Gordon Brown which had, unbelievably, used counter-terrorism laws to bring down Icelandic banks operating in the UK, and widespread resentment and envy against the Icelandic “lean and mean” newcomers in European financial markets, which meant that few if any central banks or commercial banks wanted to assist them in the rough waters of 2007–2008. Professor Gissurarson recalled that immediately after the collapse, many of the banks’ foreign assets had been sold at a fraction of their real value.

The seminar was well-attended. Iceland’s leading daily, Morgunbladid, published an interview with Professor Gissurarson 4 May under the title “Crony Capitalism Contributed to Collapse”.

Professor Gissurarson appeared on a popular television show on current affairs on Icelandic Broadcasting Service 5 May 2013 to explain his ideas: