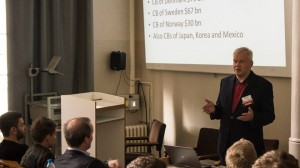 As the year 2008 went on, the Icelandic financial market became very vulnerable, heading towards a deep depression, similar to those which Icelanders frequently had to cope with in the 20th Century. However, three foreign factors suddenly brought all three Icelandic banks down and transformed a foreseeable, and manageable, depression into a total collapse. These factors were: that the American Fed refused the Icelandic central bank the same dollar swap lines that it extended to the Danish, Swedish and Norwegian central banks; that the UK government denied Icelandic-owned banks in England participation in the immense rescue programme it implemented during the financial crisis, at the same time as many other banks—some with extensive foreign ownership—were allowed to participate, including the RBS and Lloyds; and that the UK government quite unnecessarily invoked an anti-terrorism law against one of the Icelandic banks, Landsbanki, putting it on a list with Al-Qaida, the Talibans, Sudan and Iran, with dire consequences for other Icelandic companies. This was the main message by Dr. Hannes H. Gissurarson, Professor of Politics at the University of Iceland and RNH Academic Director, in his lecture at the well-attended conference of ESL, European Students for Liberty, at Humboldt University in Berlin 14–16 March 2014.

Professor Gissurarson rejected three common explanations of the Icelandic bank collapse by pointing out some relevant facts. 1) The Icelandic banks were not relatively bigger than the Swiss banks which were nevertheless bailed out, not least with money from the American Fed through dollar swaps lines. These Swiss banks had been engaged in all kinds of illegal or immoral activities, shredding documents about Jewish-owned assets and trading with governments on the British Treasury list of terrorist regimes, including Iran and Sudan—indeed the very same list where the Icelandic Landsbanki was to be seen for a while. 2) The Icelandic bankers were neither better nor worse than their foreign colleagues who accumulated enormous risk before the 2008 crisis, for example by subprime loans in the US and by reckless lending elsewhere, subsequently requiring the injection of massive amounts of government money both as liquidity and equity, for example RBS and Lloyds, both of which had also been engaged in rate rigging and money-laundering. 3) The Icelandic bank collapse was not the result of a failed “neo-liberal” experiment in Iceland, since the Icelandic financial market was regulated in precisely the same way as its counterparts in other EEA—European Economic Area—countries. Professor Gissurarson added that admittedly there were two risk factors special to Iceland: One of them was the extensive cross-ownership and extraordinary debt accumulation of one group of businessmen, The Baugur Group, led by Jon Asgeir Johannesson, well identified in a report by a Special Investigation Commission appointed by the Icelandic parliament, announcing its conclusions in 2010. The second risk factor was simply that the Icelandic banks’ field of operations—the EEA—was much bigger than its area of institutional support, which turned out in the bitter end to be Iceland alone, because of the foreign factors already mentioned.

ESL conference participants in the festivities Hall of Humboldt University with Johan Norberg holding the banner in centre. Professor Gissurarson sitting in 3rd row, furthest left. Dr. Palmer standing by the left entrance, to the left, next to Dan Grossman, chairman of Atlas Network.

Professor Gissurarson’s lecture formed a part of the joint research project by RNH and AECR, the Alliance of European Conservatives and Reformists, “Europe, Iceland and the Future of Capitalism”, while one of the sponsors of the Berlin conference was New Direction, the think tank cooperating with AECR. Chairing the meeting with Professor Gissurarson was Lukas Schweiger who has lived and studied in Iceland. Other lecturers at the conference included keynote speakers Dr. Tom Palmer, the American philosopher and activist, and the Swedish historian and writer Johan Norberg. Both spoke eloquently and to wide acclaim. Aleksandar Kokotovic from Belgrad University is chairman of ESL, while Yaël Ossowski from Vienna University was in charge of organising the very successful conference.