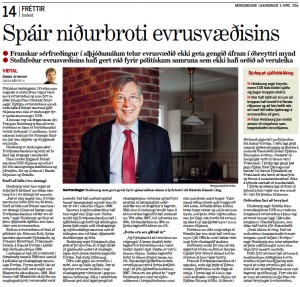 The European dream is turning into a nightmare because of the great mistake of adopting the same currency, the euro, in most of the European Union, even if many member states were totally unprepared for it. This was the conclusion of François Heisbourg, one of Europe’s best known experts on security and international affairs, at an RNH meeting 5 April 2014. Heisbourg pointed out that economic growth in the last few years had been much faster in the US, China, Brazil and India than in the eurozone. Because of the euro, some countries in Southern Europe had not been able to adjust to new economic realities. The euro rate was too high for them, while it was too low for Germany. The idea that the same size would fit all was not only unrealistic; the fact was that it fit none. A generation of young Europeans knew nothing but unemployment. The EU has been established to protect peace on the continent and to provide a framework for the four freedoms — the free movement of people, goods, services and capital between European countries. To save the EU, the euro had to be abandoned. It was the least bad of many options.

Briefly discussing Iceland in his lecture, Heisbourg said that in the 2007–9 financial crisis it had worked well for Iceland to stand outside the eurozone and to be able to stimulate exports by devaluing the currency. However, the British and the Dutch governments would probably not have treated Iceland as brutally as they did, if it had been a member state of the EU. An economist at the Central Bank of Iceland, Stefan Johann Stefansson, protested that if Iceland had been a member state, the EU would have forced it to shoulder much heavier financial obligations than it eventually had to take on. Dr. Asgeir Jonsson, an economist at the University of Iceland, asked Heisbourg if the French were really prepared to adopt the franc, which had before the adoption of the euro been more or less tied to the German Deutsche Mark. Heisbourg agreed that for the French it had been almost a matter of national pride to replace the D-Mark with the euro. But the impact of abandoning the euro would not be significant on the French economy, while it could be very important for the Southern part of Europe.

During his Iceland visit, Heisbourg met Prime Minister Sigmundur David Gunnarsson and Foreign Minister Gunnar Bragi Sveinsson, also giving a talk at the foreign affairs committee of the Independence Party. His lecture at the RNH meeting led to much debate. Bjorn Bjarnason, former Minister of Justice, blogged about his message, the daily Morgunbladid published on 5 April a long interview with Heisbourg, and both television channels, RUV and Station Two, talked to him.