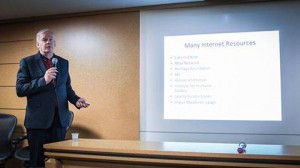 The internet is a veritable fountain of intellectual resources, data and information, supporting individual freedom. This is what Professor Hannes H. Gissurarson argued in a lecture at a conference in Porto Alegre 25 May 2014, organised by the Brazilian Students for Liberty, or Estudantes pela liberdade, on “Liberty in the Information Age”. The conference was co-sponsored by the American institute Language of Liberty and the German Friedrich Naumann Stiftung. Professor Gissurarson mentioned the websites of research institutes such as Cato Institute and Heritage Foundation, and of international associations such as the World Bank, the International Monetary Fund and many UN organisations, and also internet data banks such as the Index of Economic Freedom. Many stimulating ideas and arguments were also to be found, he said, in internet commentaries and blogs by liberal writers, for example by best-selling science writer Matt Ridley and historian Niall Ferguson. In the lecture, Professor Gissurarson showed many graphs which he had constructed from data available on the internet. One example was a graph with statistics from FAO, the UN Food and Agriculture Organisation, which demonstrated that the productivity of cultivated land had increased at a faster rate than the area of land cultivated, a development sometimes called the “Green Revolution”. Professor Gissurarson pointed out that the Malthusian scenario of an impending demographic disaster where population was growing at a faster rate than food production—spelling the eventual doom of capitalism—had not turned out to be true, even if Malthus’ prophecies were echoed in relatively recent works like the 1972 Limits to Growth (translated into Icelandic in 1974). Professor Gissurarson added that the rate of growth of world population had indeed slowed down in the last twenty years.

Professor Gissurarson’s lecture formed a part of the joint research project of RNH and AECR, the Alliance of European Conservatives and Reformists, on “Europe, Iceland and the Future of Capitalism”. Here is his graph on the Green Revolution: