Lively Debate on the Oddsson Era

Professor Hannes H. Gissurarson, former government minister Ogmundur Jonasson of the Left-Green Party, and Dr Vilhjalmur Egilsson, presently President of Bifrost College and a former Member of Parliament, discussed the David Oddsson Era at a meeting of Politica, the association of politics students at the University of Iceland, Thursday 12 November. A large meeting hall at the University was full to the brink. Gissurarson pointed out that on the most common criteria in politics, Oddsson had been a successful politician: As Mayor of Reykjavik, he had increased the share of the Independence Party in each of the elections he fought, bringing it up to more than 60% in the 1990 municipal elections; Prime Minister from Spring 1991 to Autumn 2004, he had held office longer both totally and continuously than any other Icelandic politician. Indeed, 1991 was a turning point in the Icelandic economy. Government subsidies from several funds and agencies to loss-making enterprises were abolished, and the waiting room at the Prime Minister’s office consequently emptied; inflation fell, and monetary stability was introduced; a government deficit was turned into a surplus; government companies were privatised, and the revenue used to reduce, and almost to eliminate, public debt; pension funds were strengthened and made sustainable; laws were passed to increase the protection of individual rights; and the economy was opened upon and foreign trade facilitated when Iceland joined the European Economic Area. When Oddsson resigned in 2004 as Prime Minister, the great expansion of the banking sector had not really begun. In 2004, Iceland had been one of the best countries in the world to live in, prosperous and stable.

Professor Gissurarson also discussed common criticisms of the Oddsson Era. The Prime Minister had been faulted for supporting the 2003 Iraq War; but the support had only consisted in a declaration of support for an old ally after the decision, in which Iceland was not involved in any way. This was different from the acceptance by the left-wing government of 2009–2013, in which Ogmundur Jonasson served, of the NATO air raids on Libya; within NATO, Iceland had had a veto which it had not used in this case. In the second place, the privatisation of the banks for which Oddsson was sometimes criticized had begun in 1990 when one of the three commercial banks owned by government had been sold by the left-wing government of the time. The two sales of the Oddsson government had been scrutinised by the Icelandic National Audit Office which had delivered thorough reports on them and not found anything significantly wrong with them. Professor Gissurarson’s talk formed a part of the joint project of RNH and AECR, Alliance of European Conservatives and Reformists, on “Europe, Iceland and the Future of Capitalism”. 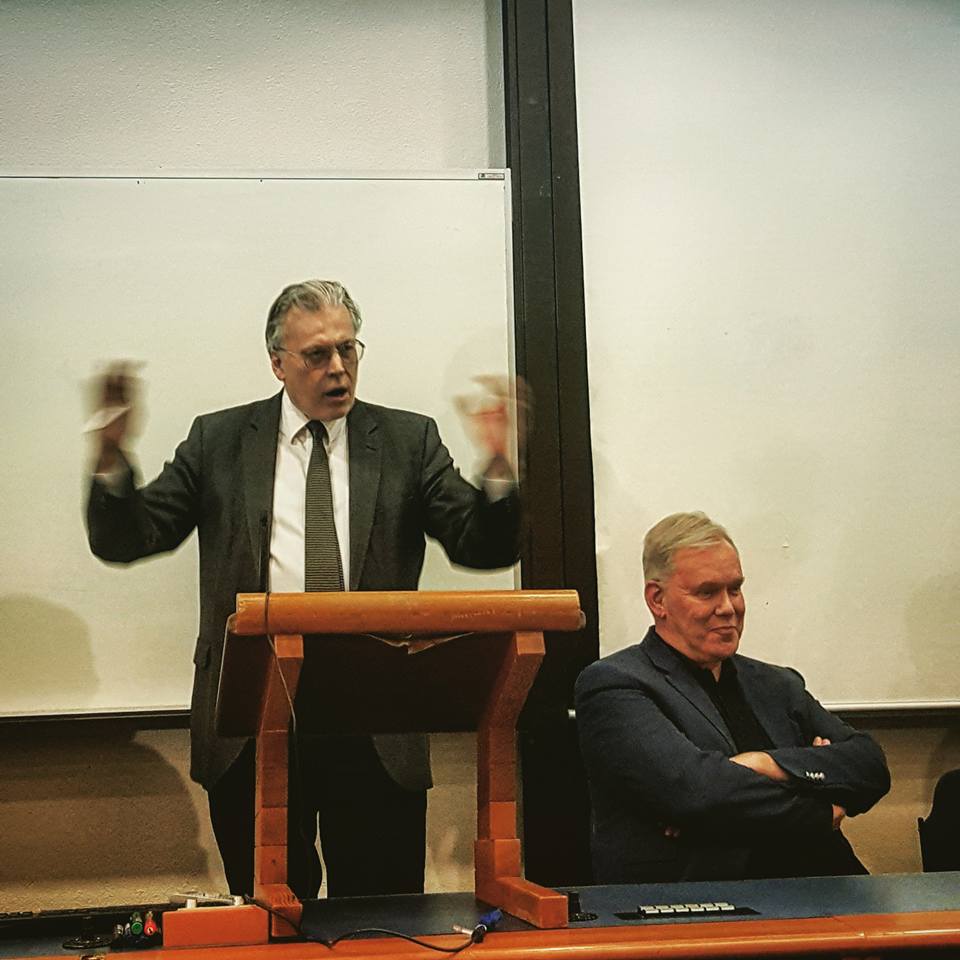 Ogmundur Jonasson said that he belonged to the same generation as David Oddsson. When they had become politically active in the early 1970s, the left wing had been spirited and full of ideas whereas the right wing had been intellectually sterile. This had changed with the arrival of Oddsson and his supporters who had been inspired politically by Reagan and Thatcher and intellectually by Hayek, Friedman and Buchanan; suddenly the right wing had become full of ideas, while the left wing stagnated. However, Oddsson and his group had broken with the consensus of the previous few decades—the golden age of the mixed economy; they had been indifferent to, or even welcomed, increased inequality of wealth and income and they had also advocated a more materialistic way of thinking; “greed was good.” Dr Egilsson recalled the 1980s when a spiral of wage increases and inflation had run out of control while the over-regulated economy had offered few opportunities to enterprising individuals. It had been necessary in the early 2000s to privatise the two government banks because they had not been able to compete with the bank which had been privatised already in 1990. There was no doubt, Egilsson argued, that most enterprises were better run by individuals seeking profit than by government officials. Egilsson added that as a Member of Parliament he had found it easy to work with Oddsson. He had not engaged in any micro-management, but he had been swift and resolute in decision-making and true to his own words.

In the discussion following the three talks, former government minister Gudni Agustsson, who had led the Progressive Party in a coalition government with Oddsson’s Independence Party, asked for the floor. He said that he and Oddsson had become good friends over the years, even if they had initially had a lot of disagreements. He could not understand however why Oddsson abandoned his earlier policies of a bilateral agreement between Iceland and the European Union (like Switzerland has) instead of membership in the European Economic Area, and of a wide dispersion of ownership of shares in the privatised banks. Agustsson added that Oddsson had as governor of the Central Bank of Iceland saved the country from catastrophe. He had been the author of the plan to ring-fence Iceland which everybody supported now as the only feasible plan out of the quagmire which the banking crisis had been for Iceland. Dr Egilsson commented that in his opinion Oddsson had performed well as a governor of the Central Bank. He could not understand why it had been a priority of the left-wing government taking power in 2009 to drive him out of the Bank.

The meeting was taped, and thousands of people have watched it on Youtube: