Iceland Not Too Small 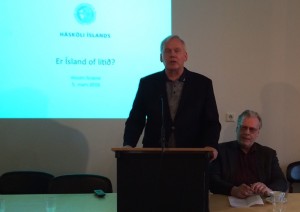 RNH Academic Director, Professor Hannes H. Gissurarson, gave a talk at a political seminar for Young Left Greens 5 March 2016 on whether Iceland was too small to be sustainable as an independent political unit, as some had claimed after the 2008 bank collapse. Professor Gissurarson described many advantages which small states enjoyed, explaining their proliferation after the Second World War. By means of free trade such states could benefit from the international division of labour and from economies of scale, without developing the lethargic, clumsy and non-transparent bureaucracies of many bigger states. Small states did not need shelters that turned into traps: rather, they needed free trade with the rest of the world, flourishing mutual relations and defence arrangements with bigger states: Iceland should for example pursue such arrangements now with the United Kingdom, the United States, Canada and Norway.

The other speaker at the seminar was former Left Green Minister Ogmundur Jonasson. After their talks a lively discussion followed, not least about justice in income distribution and about increased consumer choice in health. Gissurarson’s participation in the seminar formed a part of the joint project by RNH and AECR, the Alliance of European Conservatives and Reformists, on “Europe, Iceland, and the Future of Capitalism”.