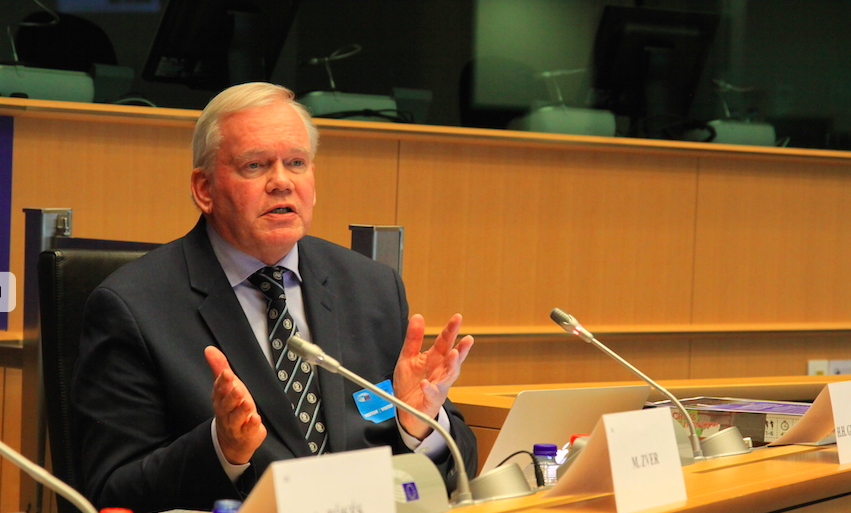 rofessor Hannes H. Gissurarson, RNH Academic Director, read a paper at a seminar in the European Parliament in Brussels 26 April 2017: Why should the memory of the victims of totalitarianism be kept alive? The Platform of European Memory and Conscience, of which RNH is a member, and the City of Brussels are jointly preparing a memorial to the victims, to be placed on one of the City’s square. A competition about its design has been launched. Professor Gissurarson recalled that there was no disagreement about keeping alive the memory of the victims of the Holocaust, one of the most terrible events in world history. People wanted to register their respect for the victims and also to try and hinder than anything like this would repeat itself. Still the will and the interest was wanting to keep up the memory of the victims of communism. The Holocaust was a unique event in world history. But the systemic extermination of potential or real opponents of communism was also unique. National socialism and communism were closely related.

In this context Prof. Gissurarson recalled that the despots Stalin and Mao did not lose a war so their misdeeds were not exposed at any Nuremberg trials. The main duty of the historian is, according to Gissurarson, to seek the truth. The conclusions were unequivocal: The evidence becoming available in the former communist states demonstrated that Robert Conquest and Aleksandr Solzhenitsyn were right about the criminal nature of communism. Prof. Gissurarson added that even his own small and peaceful nation on a remote and wind-swept island in the North Atlantic had had some encounters with totalitarianism: He told the story of German communist and Soviet resident Vera Hertzsch, who had a child by Icelandic economist Benjamin Eiriksson; both mother and child perished in the Gulag. hee also told the story of German Jewess and refugee in Iceland Henny Goldstein Ottosson, whose brother (with his whole family) was murdered by the Nazis, in Auschwitz and Natzweiler, and whose former husband and the father of her child was also murdered by them, in Auschwitz. Prof. Gissurarson furthermore briefly mentioned the series of anti-totalitarian works being republished by the Public Book Club (which was founded in 1955 to counter the dominance of unrepentant Stalinists in Icelandic cultural life).

Prof. Gissurarson said that the historian also had a duty to listen to, or even to recreate, the voices of those who had been silenced by force. The despots should not be allowed to leave this world in quiet satisfaction that their misdeeds had not been recognised and registered. In this context, he quoted French historian Chateaubriand: “When in the silence of abjection, no sound can be heard save that of the chains of the slave and the voice of the informer; when all tremble before the tyrant, and it is as dangerous to incur his favour as to merit his displeasure, the historian appears, entrusted with the vengeance of the people. Nero prospers in vain, for Tacitus has already been born within the empire.” Prof. Gissurarson’s contribution to the seminar formed a part of the joint project by RNH and ACRE, the Alliance of Conservatives and Reformists in Europe, on “Europe of the Victims”.