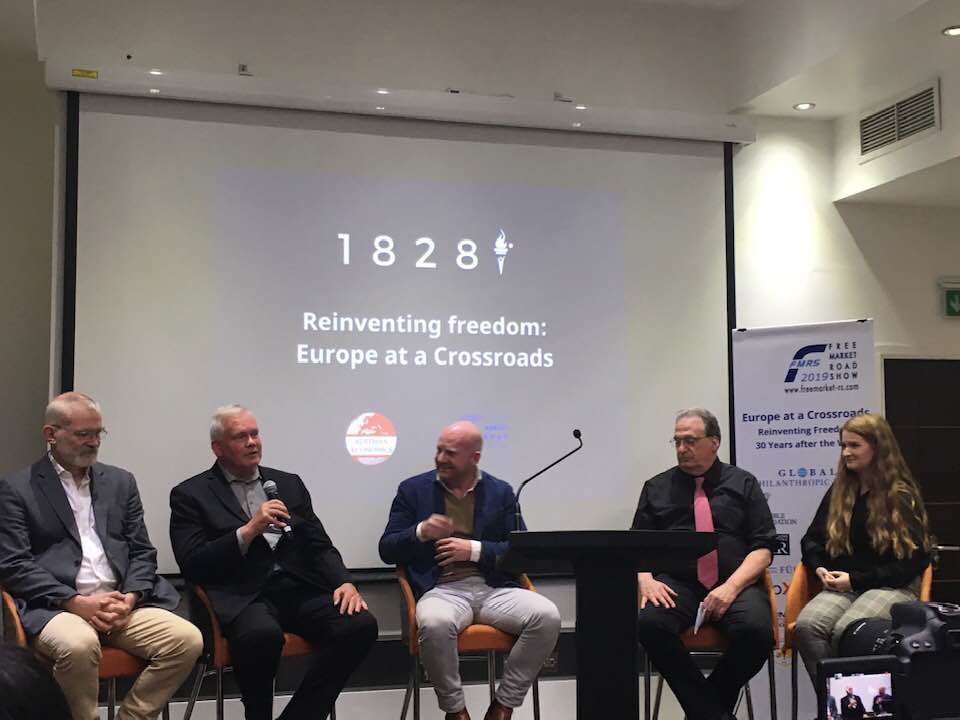 From the London event.

Economic integration paradoxically facilitates political disintegration, RNH Academic Director Professor Hannes Gissurarson said in four lectures given at the Free Market Road Show in the spring of 2019. The meetings were held in Thessaloniki 6 May, Athens 7 May, London 9 May and Stockholm 10 May. Other lecturers included Dr. Richard Rahn, former Chief Economist of the US Chamber of Commerce, and Philosopy Professor Andrew Bernstein. The Austrian Economics Center, under the leadership of Barbara Kolm, organised the Road Show.

Gissurarson recalled Adam Smith’s explanation for the wealth of nations: that it was brought about by the division of labour in the free market. This division of labour became the more beneficial the more extended the market were. The reason why small political units could however flourish was that they had access to large international markets and could therefore benefit from the global division of labour. In 1946, when the United Nations were founded, the number of independent states was 76, but now the UN had 193 member states, not counting the Vatican and Taiwan. Gissurarson pointed out that  nations in small states often were homogeneous so that the cost per capita of law enforcement was not as high as in large, heterogeneous states. Small states were also usually not as aggressive as large ones so that expenditure on the military tended to be relatively low.

Gissurarson discussed in particular the Nordic countries whose success was not, he said, because of, but despite, social democracy. Its main explanations were the rule of law, free trade and social cohesion which led to solidarity and consensus and reduced the costs of operating a state and a market. There was a strong liberal tradition in the Nordic countries, for example in Sweden, Gissurarson pointed out. Indeed, before Adam Smith the Swedish-Finnish priest Anders Chydenius had demonstrated how private and public interests could coincide under free competition. In the 19th century, again, liberal politicians had significantly increased economic freedom in Sweden, and as a consequence economic growth had been faster there than in any other country in 1870–1936.

Gissurarson said that the European Union was in transformation. While it had originally been a forum for the historical and praiseworthy truce between Germany and France, the question now was whether it would become an open market or a closed state, a federation of states or a federal state. The idea of the nation state was becoming relevant again. National socialism had been a disaster, but perhaps the idea of national liberalism, common in the 19th century, had some merit. But a country had to be a home rather than a fortress or, even worse, a prison.

In Stockholm, Gissurarson used the opportunity to meet with two other members of the Mont Pelerin Society, Dr. Nils Karlson of Ratio Institute and investment manager Peter Stein, to discuss further intellectual cooperation between classical liberals and conservatives in the Nordic countries. This meeting formed a part of the joint project with ACRE on ‘Bluegreen Capitalism for Europe’.