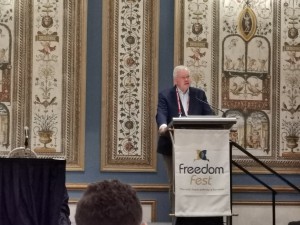 Every summer American conservatives and libertarians hold an annual meeting or festival, Freedomfest, for a few days in Las Vegas, presenting books and ideas and watching films and documentaries relevant to liberty. Organised by the prolific author, commentator and investor Professor Mark Skousen, it is the largest gathering of its kind and with a great variety of participants and topics. RNH Academic Director Hannes H. Gissurarson was invited to give a lecture at Freedomfest 17 July 2019 on ‘Green Capitalism’, on which he had in 2017 written a report for the Brussels think tank New Direction.

In his paper Gissurarson made a distinction between ‘wise use environmentalism’ aiming at a sustainable and profitable utilisation of natural resources, and ‘ecofundamentalism’ where nature is conceived of as an independent bearer of rights superior to ordinary human beings and where the goal is preservation rather than conservation. Gissurarson pointed out that ecofundamentalism seemed to share many traits with religious fundamentalism: it certainly had its sacred cows. 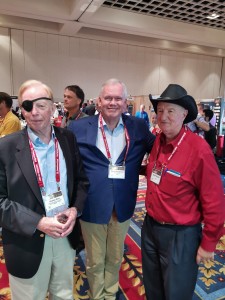 If on the other hand the goal was conservation, or environmental protection, it required protectors, Gissurarson said. For example, by one stroke of a pen African poachers could be turned into gamekeepers: by appointing them as owners of endangered species, such as elephants and rhinos, whose tusk and horns respectively were much in demand. The most realistic measure to ensure a sensible utilisation of natural resources was to define private property or use rights to them, introduce stewardship. In this context Gissurarson briefly described the Icelandic system of individual transferable quotas in deepsea fisheries which is both sustainable and profitable in contrast to many fisheries elsewhere making huge losses and being a heavy burden on taxpayers.

As the conference was held in the United States, Gissurarson also discussed whaling: the US government has put a lot of pressure on the Icelandic government to stop it. It seemed, Gissurarson observed, that whales were to ecofundamentalists like sacred cows. But in the Icelandic waters, the Icelanders themselves annually harvest about or a little over one million tonnes of fish, whereas whales eat around six million tonnes of various seafood and fish there. In other words, ecofundamentalists were demanding that the Icelanders provided fodder for the whales in their waters, while insisting that they could not harvest them. They were like the truculent farmer who drove his livestock to the pastures of his neighbours, but refused to them any utilisation of this very same livestock. Gissurarson’s paper formed a part of a joint project with ACRE, The Alliance of Conservatives and Reformists in Europe, on ‘Bluegreen Capitalism in Europe’.