The Nordic Models in Las Vegas 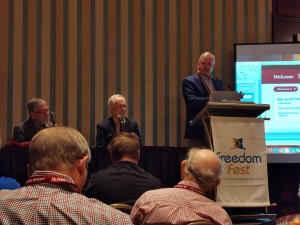 Gissurarson delivering his remarks. Next to him: Professor Gwartney.

At Freedomfest in Las Vegas in July 2019, RNH academic director Professor Hannes H. Gissurarson was asked to be a commentator on a paper by Professor James Gwartney on increased global income equality. Gwartney used data from the Angus Maddison Project and from the World Bank which show that income inequality, as measured by the Gini coefficient, was being reduced worldwide. Gwartney argued that the main explanation was the communications and transport revolution of recent times: This revolution was even more important than the Industrial Revolution of late Eighteenth Century, because this time it extended to the whole of the world. Some heavily populated countries had gone from poverty to prosperity. Gwartney suggested that the reason for the relatively even income distribution in the Nordic countries was not government policy, but rather the homogeniety of the population.

Professor Gissurarson devoted his comments mainly to the Nordic countries. He pointed out that they had a long and vibrant liberal tradition. For example, the Finnish-Swedish pastor Anders Chydenius had proposed a theory of the coincidence of private gains and the public good under unfettered competition, some years before the publication of Adam Smith’s Wealth of Nations. Liberal Swedish statesmen of the 19th century had implemented comprehensive economic reforms which had encouraged rapid and continuous economic growth in the country for a long period—the first Swedish model. Gissurarson argued that the success of Sweden and other Nordic countries in the 20th century could be attributed to 1) a strong tradition of the rule of law, including protection of private property rights, 2) free trade and 3) solidarity, a high level of trust and the pursuit of consensus, based on national homogeniety, as Gwartney had indeed pointed out. It was not until 1970 that the politically dominant Social Democrats had changed course and introduced heavy taxation and extensive government intervention.

The second Swedish model, implemented in 1970–1990, turned out to be unsustainable, according to Gissurarson. Sweden had ended up on the wrong side of the Laffer Curve where taxation became elf-defeating: an increase in the tax rate did not result in an increase in tax revenue, but rather in its decrease. The scenario described by Ayn Rand in Atlas Shrugged indeed seemed to apply to Sweden in this period: Those who created wealth either moved away, ceased to produce or desisted from innovations. The only jobs created during this period were in the public sector. However, now the Swedes found a new consensus which could be called the third Swedish model: From 1990 onwards government has tried to encourage private enterprise and keep taxation from becoming self-defeating. Professor Gissurarson’s participation in the conference formed a part of the joint project with ACRE, the Alliance of Conservatives and Reformists in Europe, on ‘Bluegreen Capitalism in Europe’.