The think tank New Direction in Brussels has published a book in two volumes by Professor Hannes H. Gissurarson on Twenty-Four Conservative-Liberal Thinkers, both online (available free of charge) and on paper.

The first volume contains chapters on Snorri Sturluson, St. Thomas Aquinas, John Locke, David Hume, Adam Smith, Edmund Burke, Anders Chydenius, Benjamin Constant, Frédéric Bastiat, Alexis de Tocqueville, Herbert Spencer and Lord Acton. Gissurarson argues that even if classical liberalism in the modern sense may be traced to Locke’s defence of the 1688 ‘Glorious Revolution’, the two medieval thinkers he discusses, Snorri and Aquinas, supported government by consent and the right to rebellion. It was however in response to the 1789 French revolution that conservative liberalism came into being, not least as articulated by Burke, Constant, and Tocqueville. The 1688 revolution was made to preserve, protect and extend traditional liberties whereas the revolutionaries of 1789 sought to reconstruct the whole of society on their principles. 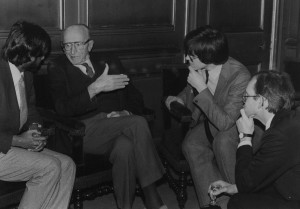 The second volume contains chapters on Carl Menger, William Graham Sumner, Ludwig von Mises, Friedrich A. von Hayek, Wilhelm Röpke, Michael Oakeshott, Sir Karl R. Popper, Bertrand de Jouvenel, Ayn Rand, Milton Friedman, James M. Buchanan, and Robert Nozick. Gissurarson grounds conservative liberalism in the concept of spontaneous coordination, as described by Smith, Menger and Hayek, from which flows on the one hand strong support for free trade and limited government and on the other hand respect for traditions, such as property, family and conventional morality. The author provides personal recollections of five thinkers, Hayek, Popper, Friedman, Buchanan and Nozick. Members of the Mont Pelerin Society figure prominent in the book which is 884 pages and carries many illustrations, paintings, photos and graphs. Some of the photos are from past meetings of the Mont Pelerin Society.