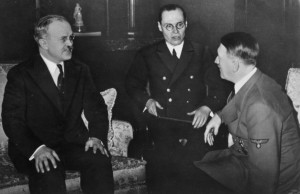 Molotov and Hitler in 1940 when the Soviet Union and Nazi Germany were still allies.

Prague, 8 July - Statement of the Platform of European Memory and Conscience on the recent article by Vladimir Putin: The Real Lessons of the 75th Anniversary of World War II issued on 18 June in the media.

In his recent article, the President of the Russian Federation Vladimir Putin wanted to show the world “The Real Lessons of the 75th Anniversary of World War II”. This text is full of mistakes, omissions, half-truths and outright lies which have been refuted by specialists in the field. In fact, Mr Putin did give the world a lesson – a lesson by example on current Russian regime propaganda and attempts to re-write history.

Even though most of the article is about the past – described in a very Stalinist way – the most important part refers to the current situation. Putting the responsibility for the outbreak of the war on almost everyone except the Stalinist Soviet Union can be interpreted as an attempt to fracture European unity, especially in the context of President Putin’s harsh criticism of the European Parliament resolution of 19 September 2019. Even more dangerous is the call to create a new world order, based on an alliance of the five nuclear-weapon states, permanent members of the Security Council. This article is a clear example of misusing the past for current political purposes.

Democratic countries of Europe are ready to discuss all aspects of the past. Historians have criticized mistakes of Western and Central European diplomacy in the 1930s many times. However, mistakes made by democratic countries cannot be used to justify aggressive actions taken by the two totalitarian regimes – Nazi Germany and the Communist Soviet Union – or even lessen their responsibility for causing the war.

Today’s Russian Federation, led by President Vladimir Putin, could not only participate in the debate but also make a significant contribution to it – by opening the World War II archives, especially those connected with Soviet-German cooperation in 1939-1941, Soviet aggressions and annexations during the war and mass crimes committed by the NKVD, Red Army and other units.

The Platform of European Memory and Conscience calls on the European Union and all European governments to: