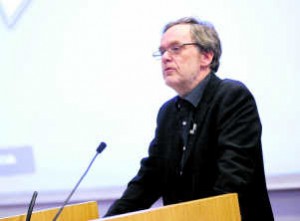 Professor Oystein Sorensen, of the University of Oslo, gave a lecture at the University of Iceland 21 September 2012 on “The Totalitarian Mindset of Anders Breivik”. Professor Sorensen maintained that the manifesto that Breivik left behind before he engaged in his mass murders showed a typical totalitarian mindset, deeply dissatisfied with liberal Western culture, and trying to play God, recreating society in some image. Sorensen said that despite Breivik’s known hostility to Islamism, the society most closely related to his ideas would appear to be Iran of the Ayatollahs. Essentially, though, Breivik could be classified as a neo-fascist. In the discussion after the lecture, Sorensen mentioned that he had written a book about those Norwegian communists who became fascists in the 1930s and 1940s. The distance between right-wing and left-wing extremism was not that long.

There was a lively exchange of ideas betweeen Sorensen and Dr. Michael Minkenberg, an Erasmus scholar currently residing in Iceland, doing research on European right-wing extremism. In Minkenberg’s opinion, Breivik’s terrorist acts served a publicity purpose. Mr. Fridrik Sophusson, former Icelandic Finance Minister, who lived in Norway for some years with his wife, then the Icelandic Ambassador there, asked how the Norwegian people had responded to Breivik’s acts. Sorensen responded that the nation had been totally unprepared for, and shocked by, them. There was a thorough account of Sorensen’s paper in Morgunbladid on 22 September 2012. His lecture can be watched here on Youtube.