Professor Stéphane Courtois: “Much work still to be done” 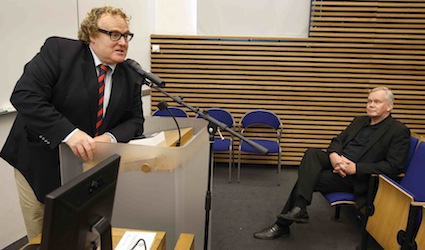 Five lectures were given at an international conference at the University of Iceland on “Europe of the Victims: Remembering Communism” 22 September 2012. In his keynote paper, Professor Stéphane Courtois, the editor of the Black Book of Communism, discussed the difficulties of fully comprehending the enormous scale of communist repression in the 20th Century, arguing that much historical work was still to be done. Such work was welcomed in many countries, for example in the Baltic States and elsewhere where communists or ex-communists were not in power. He said that the Black Book had been published in 26 languages, the most recent editions being those in Icelandic and in Georgian. It had however neither been published in Chinese nor Vietnamese.

Professor Oystein Sorensen, of the University of Oslo, analysed the writings of Karl Marx and Friedrich Engels, in the light of marxist practice. He pointed out that Engels in one place mentions the Icelanders and other Nordic nations in a very unflattering way. Dr. Roman Joch of the Czech Republic described the marxist rule in Central and Eastern Europe. Australian writer Anna Funder gave an account of the main characters in her prize-winning Stasiland. Professor Hannes H. Gissurarson, of the University of Iceland, provided a brief summary of the history of the Icelandic communist movement, from 1918, when two young Icelandic students in Copenhagen became communists, until 1998, when the last action of the People’s Alliance was to send a group of people to Cuba. In his concluding remarks, Professor Thor Whitehead, of the University of Iceland, pointed out that the evidence discovered in archives in formerly communist countries tended to confirm the historical interpretations of Aleksandr Solzhenitsyn and Robert Conquest.

In the audience, there were some prominent Icelandic historians, including Professor Anna Agnarsdottir, Dr. Gudni Th. Johannesson, chairman of the Icelandic Historical Society, and Professor Jon Olafsson, author of a book on the Kremlin ties of the Icelandic communists. The conference generated much publicity in Iceland. Both Anna Funder and Oystein Sorensen were interviewed by Morgunbladid. Anna Funder also appeared on a weekly television programme on literature, „Kiljan,“ pretaped and broadcast 23 January 2013. Four lectures at the conference can be accessed on Youtube: those of Stéphane Courtois, Oystein Sorensen, Roman Joch, and Anna Funder. Stéphane Courtois was interviewed by television host Egill Helgason for his weekly show on current affairs, pretaped and broadcast 10 February 2013: