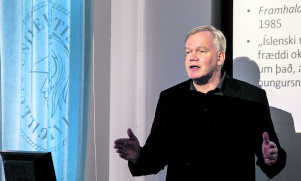 Professor Hannes H. Gissurarson read a paper on “Mao: The Story Which Has Been Told” at a meeting organised by the Confucius Institute at the University of Iceland 2 November 2012. He gave an account of the controversy in Iceland about Jung Chang and Jon Halliday’s biography, Mao: The Unknown Story, published in a translation by Olafur Teitur Gudnason in 2007. Professor Gissurarson responded to several criticisms directed at the book by Geir Sigurdsson, a Chinese-speaking philosopher and former director of the Icelandic Confucius Institute, and historian Sverrir Jakobsson. According to Professor Gissurarson, the book was an extraordinary accomplishment, the criticisms of it being about minor details, mostly debatable, and not changing the main fact that Mao was one of the worst mass murderers of the Twentieth Century, comparable to Stalin and Hitler. Using the criteria laid down in the Nuremberg Trials, Mao was guilty of crimes against the peace, war crimes and crimes against humanity.

Professor Gissurarson showed a video of Marshal Peng Dehuai—who had opposed Mao’s insane “Great Leap Forward”—being beaten and humiliated during the Cultural Revolution. Professor Gissurarson pointed out that much was already known about Mao’s crimes in Iceland: In 1952, for example, former missionary Johann Hannesson wrote a series of newspaper articles about mass executions in China after the communist victory in the civil war, and in 1963 private letters from an Icelandic student in China, Skuli Magnusson, to his fellow socialists, on the 1958–62 famine and Maoist terror, were published, without his consent. The lecture was well-attended, and will soon be available on Youtube. Former Justice Minister Bjorn Bjarnason blogged about it, and 10 November 2012 Morgunbladid reported on it.