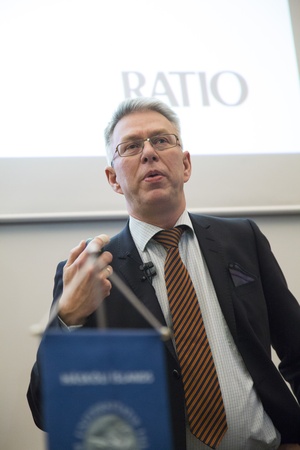 Dr. Nils Karlson, director of Ratio Institute in Stockholm, lectured on the New Swedish Model at a well-attended meeting organised by RNH and the Institute of International Affairs at the University of Iceland, Monday 14 January 2013. Ms. Alyson Bailes, chairman of the board of the Institute of International Affairs, chaired the meeting. In his lecture, Dr. Karlson made a distinction between three Swedish models. The first one was in place in 1870–1970, when the Swedish economy was quite free and the level of taxation was lower than in most other OECD countries. Indeed, until 1960 the general level of taxation was lower in Sweden than in the United States. The second Swedish model was that of 1970–1990 after the Swedish social democrats had taken a sharp turn to the left; taxes were raised and government intervention increased, with a corresponding reduction in economic freedom. Dr. Karlson argued that this second Swedish model ended in total failure in the late 1980s and early 1990s. Slowly, as a result of that crisis, a third Swedish model emerged in the mid-1990s. This was in some ways a return to economic freedom, with tax cuts, deregulation and liberalisation, while welfare benefits for the needy were maintained. From 1990 total tax revenue in Sweden has gone down from more than 52% of GDP (gross domestic product) to about 43%, a drastic change, Karlson pointed out. 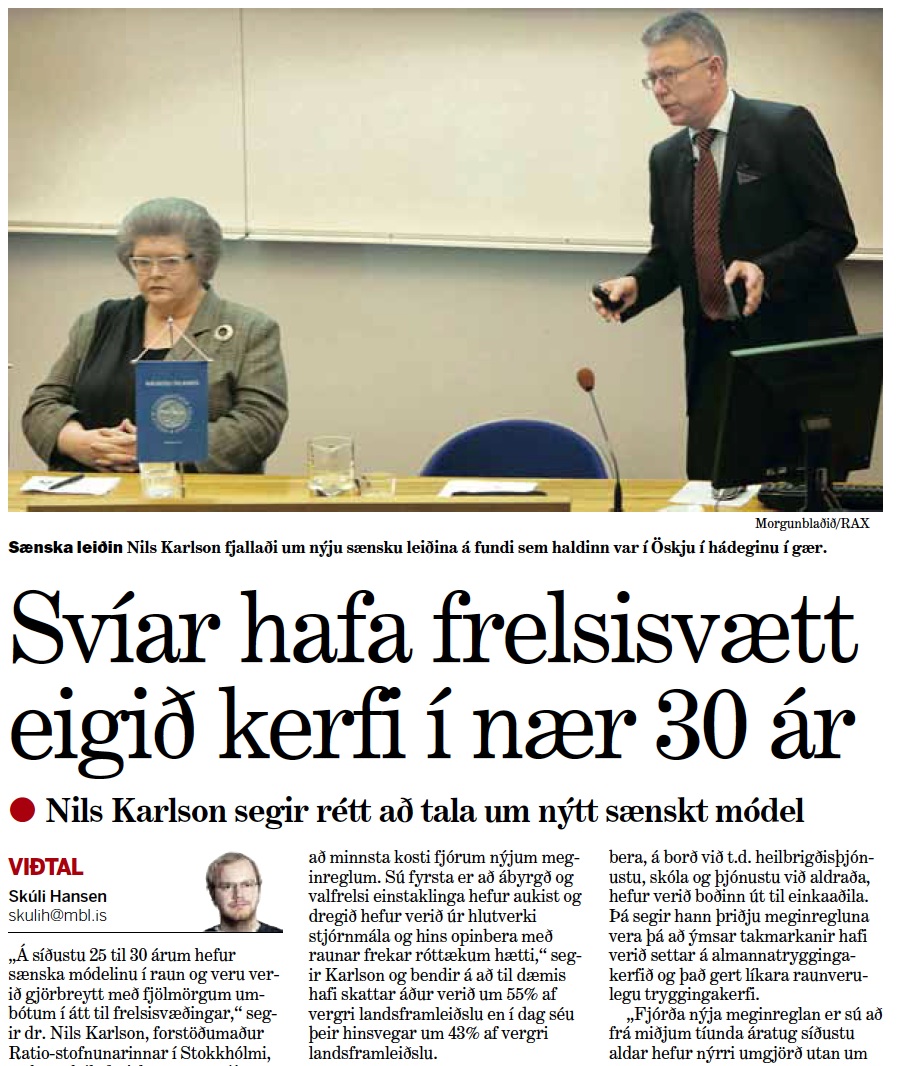 Karlson’s lecture was followed by a lively discussion where the speakers included Jon Baldvin Hannibalsson, former leader of the Icelandic Social Democrats, Professor Stefan Olafsson, a vocal opponent of economic liberalism, and Ms. Lilja Mosesdottir, economist and member of parliament (now independent, but formerly for the Left-Green Party). In the audience was Swedish Ambassador Anders Ljunggren, who worked, as the representative of the Centre Party, with the Swedish Social Democrats on some of the financial reforms of 1995–1998. Vidskiptabladid, The Icelandic Journal of Commerce, spoke with Karlson on its Internet television 14 January, and Morgunbladid, Iceland’s leading daily, published an interview with Karlson 15 January. Moreover, Bjorn Bjarnason, former Minister of Justice, and Professor Stefan Olafsson both devoted blogs to Karlson’s message, interpreting it quite differently.