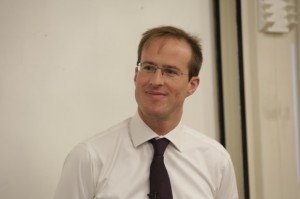 Matthew Elliott, who founded the British Taxpayers’ Alliance, gave a talk at a well-attended meeting of RNH and the Icelandic Taxpayers’ Alliance Friday 20 September 2013. The author of several books critical of oppressive taxes and the waste of taxpayers’ money, Elliott briefly described the foundation and operation of the TPA, an independent grassroots organisation comprising about 80,000 people, making a huge impact on British politics. He argued that taxes had to be moderate and simple, adding that there were ample opportunities to save money by eliminating waste, and without cutting essential government services to the really needy. He said that his favourite example of government waste was that in one of the office buildings of the British parliament, ten trees had been put up for no less than £400,000. Elliott reminded the audience that a grassroots organisation had to focus on simple and intelligible examples, bringing the real problem closer to people so that they could relate to them. 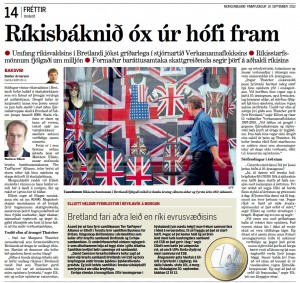 In his successful visit to Iceland, Elliott also talked about public policy reforms at a meeting held by the Independence Party Saturday 21 September. Gunnlaugur Snaer Olafsson of the Youth Against EU Membership conducted an online interview with Elliott, now available on Youtube. There, Elliott described the waste and corruption in Brussels where the bureaucrats were mostly tax-free. He pointed out that the EU funded a huge propaganda machine. Morgunbladid published an interview with Elliott 19 September. There, he said that the European nations would find themselves at crossroads after the German parliamentary elections: Some would like to go further in integrating Europe, others wanted to maintain their national identity and sovereignty. The United Kingdom was, like Norway and Iceland, situated in the outer belt, so to speak, of Europe. The online magazine Andriki published a news item about the meeting with Elliott 20 September. The business magazine Vidskiptabladid gave an account of Elliott’s talk 20 September and also published an online interview with Elliott on its website. The meeting with Elliott formed a part of the joint RNH-AECR programme on “Europe, Iceland and the Future of Capitalism”. This meeting was also the first event in a research project on taxes jointly undertaken by RNH and the Icelandic Taxpayers’ Alliance. The next two events will be Monday 14 October in the ceremonies hall (hatidasalur) of the University of Iceland, 17–19, where arguments against a special resource rent tax will be discussed, and Monday 4 November in N-131 in Askja, the Natural Sciences House of the University of Iceland, 12–13, where Dr. Daniel Mitchell of Cato Institute will discuss the evidence for the Laffer Curve.