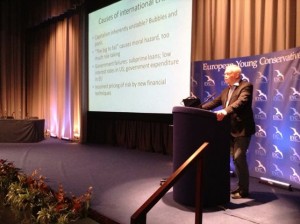 Professor Hannes H. Gissurarson, a member of RNH’s Academic Council, gave a lecture on the 2008 Icelandic bank collapse at the Freedom Summit of European Young Conservatives in Cambridge 22 September 2013. Gissurarson agreed with one of the main conclusions in the report by the Special Investigation Commission on the bank collapse, appointed by the Icelandic parliament, that in the Icelandic banking sector a special and additional systemic risk had been created by the debt accumulation of some of the banks’ owners, in particular the Baugur Group under the leadership of Jon Asgeir Johannesson. Another systemic risk, special to the Icelandic banking sector, was that its field of operations was much bigger than what ultimately proved to be its area of institutional support. While those two systemic risks made the Icelandic banking sector vulnerable, Gissurarson pointed out that three crucial decisions then made had not been adequately explained: Why did the US Federal Reserve System make currency swap deals with all the Scandinavian central banks—essentially a license to print dollars—refusing a similar deal with the Icelandic central bank? Why did the British Labour government close the two Icelandic-owned banks in London at the same moment as it bailed out all other banks in England, including banks under investigation for money laundering and libor rate-fixing and excessive management benefits? Why did the Labour government then use the British anti-terrorism law against Icelandic institutions (briefly the Central Bank) and companies (Landsbanki), thus virtually cutting Iceland off from the rest of the world? 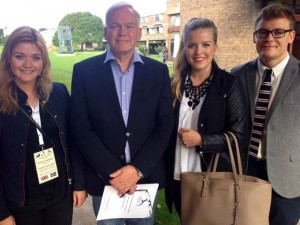 Professor Gissurarson mentioned some reasons why there was hostility to the Icelandic banks in neighbouring countries. The British Secret Service, MI5, had for example investigated the bank owners because of suspicion that they had been laundering Russian mafia money. No evidence was found substantiating this.  The Secretary of the Treasury, Alistair Darling, has stated in his memoirs that some Icelandic bankers had been generous donors to the British Conservative Party. Gissurarson said that he had searched for evidence of this, but not found any. Many city councils controlled by the Labour Party had kept their money in Icesave accounts, operated by one of the Icelandic banks, and the Labour government was presumably under pressure from them when the banks became vulnerable. The main explanation, however, was doubtlessly that the Icelandic banks had been tough competitors on the European financial markets. The financial establishment in Europe and probably North America too had concluded that the Icelandic banks had to be taken down, as an example to the rest, just as Lehman brothers had not been rescued two weeks before the Icelandic collapse. Gissurarson made clear that he was not defending the Icelandic banks, only pointing out that many big banks elsewhere in Europe would have collapsed, if they had not been rescued by currency swap deals made with the American Fed, for example Danske Bank in Denmark and UBS and Credit Suisse in Switzerland. Professor Gissurarson added that he did not believe in bank bailouts at whichever cost. For example, Irish taxpayers now were saddled with an enormous burden from their government having guaranteed all the obligations of their banks.

The Freedom Summit was held on the occasion of the 20th anniversary of European Young Conservatives. The Icelandic Young Independents had been one of the founding associations. The then-leaders of the Young Independents had agreed with the Young Conservatives in the United Kingdom and others that many youth organisations in Europe were too dependent on the Brussels bureaucracy. Margaret Thatcher, former Prime Minister of the United Kingdom, was the protector of EYC, and David Oddsson, Prime Minister of Iceland 1991–2004, served as one of its honorary presidents. Tim Dier is the present chairman of EYC. Daniel Hannan, a long-time friend of Iceland, MEP and the secretary of AECR, the Alliance of European Conservatives and Reformists, gave the keynote speech at the Freedom Summit dinner Saturday 21 September. Another long-time friend of Iceland, Andrew Rosindell, MP, gave the closing remarks Sunday 22 September. Rosindell was the first chairman of EYC. He has often visited Iceland and has many Icelandic friends. In his remarks, he pointed out that the EYC logo was an Icelandic swallow flying, the symbol of freedom. The founders of EYC did not want the traditional EU ring of stars. Eight representatives of the Icelandic Young Independents came to the Freedom Summit. They were shown the Churchill archives, kept in Churchill College, which was the Summit venue. AECR was the main supporter of the summit where 120 representatives of 37 countries came together. The participation of Professor Gissurarson in this event forms a part of the joint RNH-AECR project on “Europe, Iceland and the Future of Capitalism”.

Professor Gissurarson discussed his findings about the bank collapse on the popular radio show “Harmageddon” Wednesday 25 September, where his hosts were Frosti Logason and Mani Petursson.