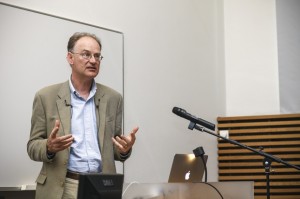 Many exciting events are coming up at RNH in the autumn of 2014. At a seminar on “Taxes and Income Distribution” Friday 24 October, 4 pm, in the meeting room of finance company Gamma, Gardastraeti 37, Professor Corbett Grainger of the University of Wisconsin in Madison will explain why a resource rent tax in the fisheries may be both less efficient and less equitable than the development of private use rights; Professor Ragnar Arnason will analyse some deficiencies in the measurements of income distribution and tax burdens; and Professor Hannes H. Gissurarson will criticize the theories of French economist Thomas Piketty on an ever-widening gap between rich and poor. The seminar is held on the occasion of the publication, by AB Publishing, of a collection of papers in Icelandic, Tekjudreifing og skattar (Income Distribution and Taxes), by six Icelandic scholars, Professors Ragnar Arnason and Hannes H. Gissurarson, Associate Professor Birgir Th. Runolfsson, Assistant Professor Helgi Tomasson and doctoral candidates Axel Hall and Arnaldur S. Kristjansson. The book was sponsored by an institute with which RNH often cooperates, RSE. The seminar is co-sponsored by the Icelandic Taxpayers’ Association.

At a seminar on “The World is Getting Better” Thursday 30 October at 5 pm, in the meeting room of the finance company Gamma at Gardastraeti 37, best-selling author Dr. Matt Ridley, former science editor of the Economist, member of the House of Lords and a regular contributor on science to The Times, will discuss the main topics in his book The Rational Optimist which is being published by AB Publishing under the title Heimur batnandi fer (The World is Getting Better). A frequent visitor to Iceland, for salmon fishing, Ridley mentions Iceland thrice in his book. Professor Thrainn Eggertsson responds to Ridley’s talk, and Professor Ragnar Arnason explains why the Icelandic system of individual transferable quotas, ITQs, in the fisheries is a good example of a sustainable and profitable utilisation of a natural resource. The two seminars form part of the joint RNH-AECR project on “Europe, Iceland and the Future of Capitalism”. RNH will also be one of the sponsors of a European Students of Liberty conference in Iceland 15 November.

Professor Hannes H. Gissurarson who is RNH academic director, will also give some lectures this autumn. One of them will be at the Economic Freedom Institute conference in Manhattanville in New York 10–12 October on F. A. Hayek’s Road to Serfdom. There he will describe how three Icelandic institutions, grazing rights in the Icelandic mountains, an indexed currency for long-term contracts (establishing in fact two currencies, one soft and one hard) and fishing rights, ITQs, in the fisheries, are all examples of spontaneous orders in Hayek’s sense, even if they have to be supported by law. Another lecture will be at a European Students for Liberty conference in Bergen 18 October where he criticizes the ideas of French economist Thomas Piketty on income distribution. The third lecture will be at a conference organised by the Social Sciences Research Institute at the University of Iceland 31 October on the attitude and opinions of British authorities, in particular Chancellor Alistair Darling, on Iceland. Professor Gissurarson discusses Darling’s account of Iceland in the financial crisis in his 2011 book, Back from the Brink. The fourth lecture will be at the Institute of Economic Affairs in London 27 November where he seeks explanations for the fact that Iceland was left out in the cold in the 2007–9 international financial crisis. His lectures form part of the joint RNH-AECR project on “Europe, Iceland and the Future of Capitalism”.

Twenty five years will have passed on 9 November 2014 from the fall of the Berlin Wall, a symbol of the victory over communism in the Cold War. On this occasion, RNH will open a website with online books on communism, starting with the Black Book of Communism, edited by Stéphane Courtois, originally published in French in 1997, and published in an Icelandic translation by Professor Hannes H. Gissurarson in 2009. This event forms a part of the joint RNH-AECR project on “Europe of the Victims”. Dr. Tara Smith of the University of Texas in Austin will give a lecture Monday 24 November at 5 pm at the University of Iceland, meeting room HT-105 in Haskolatorg, on the message of Russian-American author Ayn Rand, whose books have sold in more than thirty million copies all around the world and inspited many readers. AB Publishing, sponsored by RNH, has published three novels by Rand, The Fountainhead (Uppsprettan in Icelandic) 2012, Atlas Shrugged (Undirstadan in Icelandic) 2013 and We the Living (Kira Argunova in Icelandic) 2014. A staunch supporter of capitalism, Rand maintained that progress could only be brought about by creative individuals, entrepreneurs and innovators, not by those who live by exploiting others. Dr. Smith’s lecture forms a part of the joint RNH-AECR project on “Europe, Iceland and the Future of Capitalism”.

Next year, 2015, Professor Gary Libecap, one of the world’s leading experts on resource management, Professor Andrew Morriss, an expert on law and economics, Julian Morris of Reason Foundation and other scholars will give papers at an RNH conference on “Green Capitalism”.