Emerging Asia and the Future of Liberty 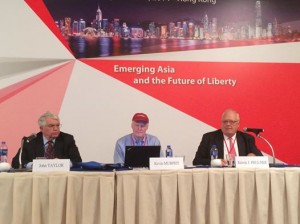 The emerging Asia of the last thirty years was the main topic discussed at the 2014 general meeting of the Mont Pèlerin Society in Hong Kong 31 August to 5 September. Hundreds of millions of Asian people have migrated from poverty to at least some affluence in these three decades, by participating in international free trade and by utilising the forces of private property rights and market competition. Economists from Japan, India, South Korea, Hong Kong and China described the economic development in their respective countries. One session at the meeting was devoted to “China and the World”, where two renowned sinologists, Dr. Edward Luttak and Professor Roderick Farquhar, described their attempts at understanding and explaining China where a communist party maintains a monopoly of political power at the same time as it has abandoned common property and central planning. Another session was devoted to inflation and monetary affairs, where the speakers included Professor John Taylor of Stanford University (after whom the Taylor rule is named). One session at the meeting was on the position of the middle class in the West which had, according to some writers, seen its relative share in total income reduced relative to the share of the highest-income group. In this session Professor Kevin Murphy of the University of Chicago discussed investment in human capital as a possible explanation of a widening gap between income groups, at the same time as he and other speakers stressed that on a global level the gap (as traditionally measured) had actually shrinked, not least as a result of emerging Asia. Mr. Tung Chee Hwa, the first Chief Executive of Hong Kong as an autonomous region in China, and Mr. Vaclav Klaus, former President of the Czech Republic, shared their experiences and insights at luncheon talks.

Professor Gary Becker chaired the programme committee for the meeting, but sadly he passed away a few months before the event, in the spring of 2014. Professor Richard Wong of the University of Hong Kong chaired the local organisation committee. Three Icelanders attended the 2014 MPS meeting, Gisli Hauksson, Chairman of the RNH Board, Jonas Sigurgeirsson, RNH Executive Director, and Professor Hannes H. Gissurarson, RNH Academic Director and the only Icelandic member of the MPS. They joined the other Nordic members and guests at the MPS meeting at a dinner 2 September. Professor Allan Meltzer, one of the world’s best-known monetary economists, stepped down as MPS President, and was replaced by Professor Pedro Schwartz of Spain. The long-serving MPS Treasurer, Dr. Ed Feulner, former Director of Heritage Foundation, also stepped down at the meeting, and was presented with a specially commissioned portrait for his tireless work and contribution to the MPS. The Mont Pèlerin Society was founded in Switzerland in the spring of 1947 by Friedrich von Hayek and many other distinguished economists, such as Frank H. Knight, Ludwig von Mises and the later Nobel Prize laureates Milton Friedman, George J. Stigler and Maurice Allais. The original members also included Anglo-Austrian philosopher Karl R. Popper. The next regional meeting of the MPS will be in Lima in Peru 22–25 March 2015, while the next general meeting will be in Miami in September 2016. In August 2005, the MPS held a regional meeting in Iceland, where the speakers included Professor Harold Demsetz of the UCLA, Vaclav Klaus, then President of the Czech Republic, and five Icelanders, David Oddsson, then Foreign Minister, Dr. Kari Stefansson of Decode and University of Iceland Professors Ragnar Arnason, Thrainn Eggertsson and Hannes H. Gissurarson.