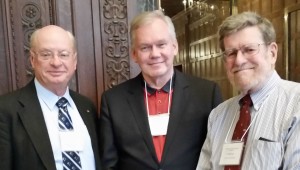 From left: Jordan, Gissurarson and Poole.

Grazing rights in the Icelandic mountain pastures, individual transferable quotas in the Icelandic fishing grounds and the indexed Icelandic krona are three examples of institutions or solutions developed spontaneously by the market rather than imposed by government. This was claimed by Professor Hannes H. Gissurarson at a conference on the social and political theories of Friedrich von Hayek at Manhattanville College in New York 10 October 2014, organised by the Economic Freedom Institute. Professor Gissurarson recalled his meetings with Hayek who had asked the students of his thought not to become Hayekians, but rather to maintain their critical faculties and to develop classical liberal principles further, on their own. It was in this spirit, Professor Gissurarson said, that he offered his analysis of these three examples. The grazing rights in the mountain pastures and the individual transferable quotas in the fisheries had both been developed to escape “the tragedy of the commons” where open access to resources led to their over-utilisation. Professor Gissurarson said that he had first suggested the introduction of quotas in the fisheries at a conference in Thingvellir in 1980, in order to stop over-fishing, but that he had not then been aware of the fact that such quotas had already been allocated in 1975 in the herring fishery and in 1979 in the capelin fishery. A system of individual quotas was then introduced in the demersal fisheries (including the important cod fishery) in various stages from 1984, the quotas gradually becoming transferable and permanent. The system of individual transferable quotas was, according to Professor Gissurarson, a good example of an institution which was not designed by academics, but spontaneously developed by the parties directly involved, and then explained and articulated by academics.

Professor Gissurarson said that he had suggested publicly in 1983 that the Icelanders should abandon the krona and use instead some harder currency, arguing that the krona was not adequately fulfilling two of the three roles of money, as a unit of account and a store of value. However, he had not realized then that this problem had already been solved in Iceland by the use of the indexed krona which performed these two roles very well, while the ordinary krona could be used as before for the third role, as a medium of exchange. In fact, two currencies were — and still are — used in Iceland, the indexed krona for long-term contracts and the ordinary krona for short-term transactions. Professor Gissurarson pointed out that while legislation had certainly been necessary to support these three institutions, they were examples of solutions of the market rather than of government: the results of human action, but not of human design. Professor Gissurarson used the opportunity while in New York to have discussions with Professor Frederic Mishkin on the 2008 Icelandic bank collapse and with Walker F. Todd, a former lawyer at the Federal Reserve System and a specialist on currency swap deals. He also discussed the international financial crisis, the operations of the Federal Reserve System and the Icelandic bank collapse with Dr. Jerry Jordan, former President of the Federal Reserve Bank of Cleveland, and Dr. William Poole, former President of the Federal Reserve Bank of St. Louis. Both Jordan and Poole attended the Manhattanville College conference which was presided over by Professor Emeritus Anna Sachko Gandolfi and her husband, Dr. Arthur E. Gandolfi, former Citicorp Vice President and a student of Ayn Rand and Ludwig von Mises. The two Gandolfis have published, with David P. Barash, Economics as an Evolutionary Science. Professor Gissurarson’s lecture at the conference formed a part of the joint project of RNH and AECR, the Alliance of European Conservatives and Reformists, on “Europe, Iceland and the Future of Capitalism”.