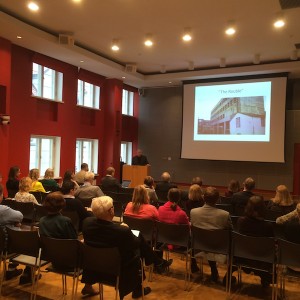 Gissurarson giving his lecture on 29 April 2015.

On 24–26 April 2015, Professor Hannes H. Gissurarson, RNH Academic Director, attended the annual conference on international affairs in Tallinn, Estonia, named after Lennart Meri, Estonian President in 1992–2001. The speakers at the conference included Toomas H. Ilves, President of Estonia, Radek Sikorski, former Polish Foreign Minister and presently Speaker of the Polish Parliament, Ana de Palacio, former Spanish Foreign Minister, Uffe Ellemann-Jensen, former Danish Foreign Minister, Swedish writer Anders Aslund and many government ministers from the Baltic countries. Some of the lecturers have visited Iceland under the auspices of RNH or of similar organisations, for example François Heisbourg and Andrei Ilarionov. The main topic of the conference was the situation in countries on Russia’s border, the Ukraine as well as the countries of Central and Eastern Europe. The participation by Professor Gissurarson in the conference formed a part of the joint RNH and AECR project on “Europe, Iceland and the Future of Capitalism”. In the evening of 24 April Professor Gissurarson attended a dinner party given by President Ilves for a few of the conference attendees. During his stay in Tallinn, Professor Gissurarson also paid a visit to Dr Mart Laar, former Estonian Prime Minister and presently Chairman of the Board of the Estonian Central Bank.

On 29 April 2015, Professor Gissurarson gave an address at the Estonian Parliament on the Icelandic communist movement and the Baltic nations. The lecture was sponsored by the Estonian Member of Parliament and historian Dr Mart Nutt. In his paper, Professor Gissurarson provided an outline of the development of the radical left movement in Iceland, from the autumn of 1918 when Brynjolfur Bjarnason—long one of the most influential members of the movement—turned into a communist by witnessing a street riot in Copenhagen, and to the autumn of 1998 when the last action of the People’s Alliance leadership, before the party was dissolved, was to accept an invitation by the communist party of Cuba to visit. The delegation to Cuba included Chairman Margret Frimannsdottir and former Chairman Svavar Gestsson, who had in his youth attended a school for communist cadres in East Berlin. Professor Gissurarson submitted that both the communist party—a branch of Comintern, the Communist International—which operated in 1930–1938, and its successor, the Socialist Unity Party, which operated as a political party until 1956 and after that as a part of a broader electoral alliance, were loyal to Moscow, as amply confirmed by documents found in Moscow archives after the collapse of the Soviet Union. Those two parties accepted significant secret financial contributions from Moscow, enabling them to buy or build four large houses in Reykjavik and to employ several people, making quite a difference in tiny Iceland, with a population in the 1930s  of a little more than 100,000 people. There was only one example of the Socialist Unity Party not towing the Moscow line, and this was that it refused to condemn the communist parties of Yugoslavia and Albania when those parties fell out of favour in the Kremlin.

Professor Gissurarson discussed the Baltic nations in this context. A Latvian woman, Liba Fridland, had toured Iceland in 1923, giving lectures on the Bolshevik Revolution, describing communist despotism in vivid details. As a result, she had been fiercely attacked in the press by communists. A Lithuanian refugee, Teodoras Bieliackinas, had written a series of articles in Morgunbladid in 1946 on the oppression of the Baltic countries. Consequently, he had been condemned by the communist press as a “Lithuanian fascist” despite the fact that he was Jewish (in fact, his father, the distinguished lawyer Simonas Bieliackinas, perished in Auschwitz). When the Public Book Club (Almenna bokafelagid) was established in 1955 to counter the communist influence in Icelandic culture, its first publication was a book by Ants Oras, an Estonian Professor of Literature, on the oppression in the Baltic countries, Baltic Eclipse (Orlaganott yfir Eystrasaltslondum). In 1957, the President of Iceland and the Foreign Minister, both staunch anti-communists, had received the Estonian Prime Minister in Exile, Dr August Rei, despite the protests of the Soviet Ambassador. In 1973, the Public Book Club had published a book by Estonian-Swedish journalist Anders Küng, Estonia: A Small Nation Under Foreign Yoke (Eistland: Smathjod undir oki erlends valds). Describing the enforced Russification of this small nation, it was translated by a young law student, David Oddsson, who was to become Prime Minister of Iceland in 1991. One of Oddsson’s first actions in office was to reaffirm the recognition by Iceland of the sovereignty of the Baltic countries. Iceland had, as most Western countries, never recognised the Soviet occupation of the Baltic countries.

Professor Gissurarson also criticized the less than sympathetic coverage of the Baltic nations in a widely-used history textbook in Iceland, New Times (Nyir timar), published in 2006 by two socialist historians, Sigurdur Ragnarsson and Gunnar Karlsson. The two authors wrote, for example (p. 246): “In 1940, the three Baltic states, Estonia, Latvia and Lithuania, were annexed [innlimud] to the Soviet Union as member republics.” Professor Gissurarson pointed out that, as the Baltic nations have always maintained themselves, the three countries were in 1940 put under military occupation, and not “annexed”. The two authors also wrote (p. 263): “In Yalta, the West recognised de facto that the Baltic States and the Eastern part of Poland would remain a part of the Soviet Union and that Eastern Europe would remain on the Soviet sphere of influence.” According to Professor Gissurarson, this was never a part of the Yalta agreement. First, the authors disregarded the fact that neither Roosevelt nor Churchill meant by a “sphere of influence” the imposition of a one-party communist police state. Second, neither the United States nor the United Kingdom recognised the Soviet occupation of the Baltic states. Then, the two authors wrote on the Soviet “glasnost” period (p. 292): “Increased freedom of speech however woke up old nationalism in many Soviet republics. The nationalist movement was strongest in the three Baltic countries, Estonia, Latvia and Lithuania, but it was also present elsewhere. Finally the Baltic countries declared their independence and seceded from the Soviet Union as they had actually the right to do according to the constitution.” Professor Gissurarson found this a very misleading account of what happened. No demand for national sovereignty needed to be awakened in the Baltic nations, as they had never accepted the Soviet occupation of their countries and had always wished to remain independent. It was also absurd to speak as if they had had a real right to secede from the Soviet Union which they had subsequently decided to use. This was the Kremlin version of events, not that of the Baltic nations. No decision had been made by the Baltic nations either to join the Soviet Union or to secede from it. Professor Gissurarson’s lecture formed a part of the joint RNH and AECR project on “Europe of the victims”.