Pardo: In Cuba, no dissent tolerated 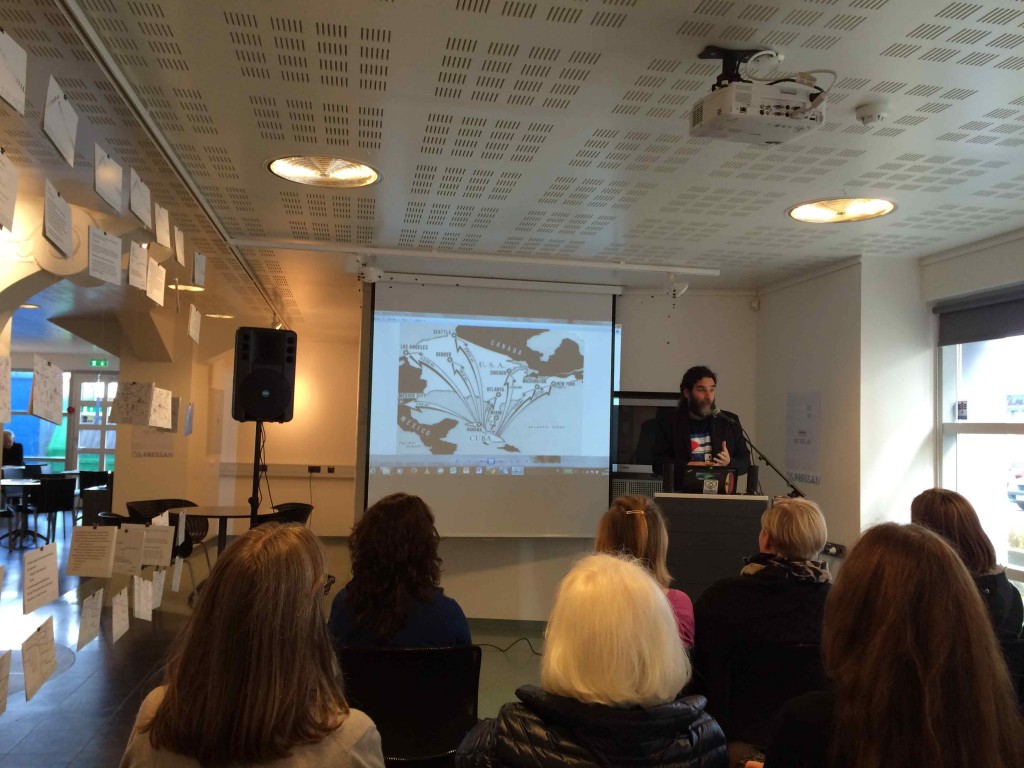 At a meeting organised by the Icelandic Pen Club and the Reykjavik Municipal Libary Saturday 10 October the poet and blogger Orlando Luis Pardo Lazo gave a talk on human rights violations in Cuba. Writer Sjon was in the chair. After persecution by Castro’s secret police, Pardo decided to move to the United States. In his lecture, he expressed surprise at the belief that by criticizing oppression in Cuba he had somehow become a U.S. Republican. It was an indisputable fact that the Cuban regime was one of censorship and suppression of all dissent, all divergence. Writers who dared criticize the rulers or even just to discuss matters not supposed to be on the agenda were monitored, threatened, imprisoned, often tortured and sometimes executed. Pardo said that he regarded himself as a leftist, but Westerners should not close their eyes to the oppression on this tropical, distant island.

Pardo showed a slide which compared the arrangements of the Icelandic parliament where the seats of different parties were shown in different colours and of the Cuban National Assembly where all representatives belonged to one party and where hence all the seats were of the same colour. Pardo presented many slides with photographs of persecuted Cuban intellectuals, including Carlos Franqui who had been removed from photographs after he turned against communism. Pardo also showed clips from Castro’s speeches including the notorious one on 13 March 1963 where he attacked tight jeans worn by some Cuban youth as being “feminine”.  In his talk, Pardo described the mass migration out of Cuba. Many Cubans had voted with their feet or with their oars, by fleeing or moving from Cuba. In Pardo’s judgement, Raúl Casto who had replaced his brother Fidel as dictator, had not significantly liberalised the country. It was most likely that Raúl’s son would succeed him, making Cuba a hereditary state like North Korea.

The meeting was well-attended, but little mention was made of the past fervour by which many Icelanders supported the Castro régime. Magnus Kjartansson, editor of Socialist newspaper Thjodviljinn, had travelled to Cuba in 1962, had had discussions with Che Guevara and had listened to some of Castro’s marathon speeches.  The people he met included Carlos Franqui, mentioned in Pardo’s lecture. In Iceland, Kjartansson published a travelogue praising Castro. Some Icelanders, including Silja Adalsteinsdottir, for a while also an editor of Thjodviljinn, and Pall Halldorsson, militant leader of the public employees’ association, had also been volunteers harvesting sugar for Castro. The last action of the People’s Alliance, dissolved in 1998, was to send a delegation to Cuba on the invitation of the Cuban Communist Party. The delegates included Margret Frimannsdottir, last Chairman of the People’s Alliance, and Svavar Gestsson, the East Germany-trained Chairman of the People’s Alliance in 1980–1987. The delegation asked for a meeting — or rather an audience — with Castro who however did not bother to meet them. The support of RNH for this meeting forms a part of the joint project with AECR, Alliance of European Conservatives and Reformists, on “Europe of the Victims: Remembering Communism”.