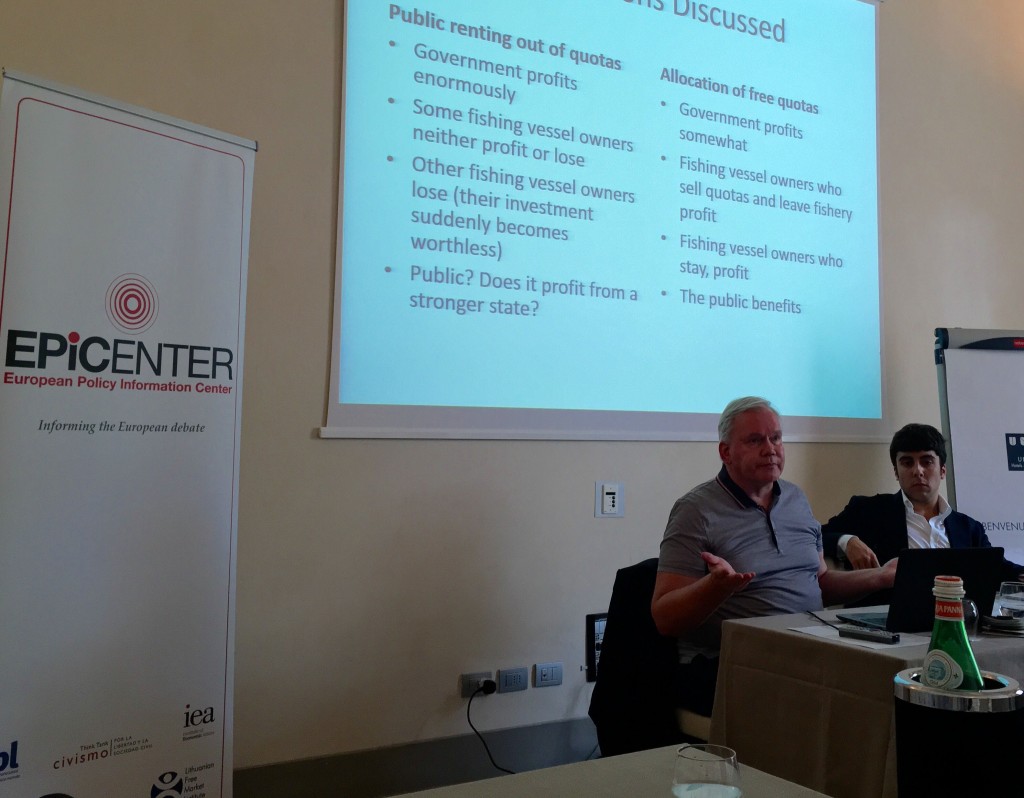 Professor Gissurarson gives his talk. Diego Zuluaga is in the chair.

In the United Kingdom, considerable interest in the Icelandic system of managing the fisheries can be found, now when the country is leaving the EU and will not be subject to the failed CFP, Common Fisheries Policy. This became clear at a conference on private governance organised by the IEA, Institute of Economic Affairs, in London and Epicenter, a coalition of major European think tanks, in Florence 7–9 September 2016. RNH Academic Director Professor Hannes H. Gissurarson discussed the general common pool problem which is essentially that under open access to natural resources, utilisation of those resources will increase to the point where all possible profit will be dissipated in excessive effort. Common utilisation implies over-utilisation. The solution is often to develop exclusive use rights to the resources—to enclose the commons in one way or another. Professor Gissurarson described some such solutions developed in Iceland over the centuries: Grazing rights in the mountain pastures common to each farming community were allocated to individual farms; in the numerous salmon rivers each riparian farmer holds a right to a certain part of the total effort allowed in the river; and, most importantly, in the offshore fisheries individual transferable quotas, ITQs, amounting to a right to harvest a given proportion of the total allowable catch, have been allocated. Professor Gissurarson said that the ITQ system worked quite well, as was demonstrated by the fact that the chief complaint in Iceland was that the fishing firms were very profitable whereas in most other countries they were operated at huge losses.

Other speakers included German economist Guido Hülsmann who discussed central banks, Brazilian economist Diogo Costa who analysed the share economy, and Chemistry Professor Terence Kealey from England who pointed out the lack of evidence for any positive impact on economic growth from public investment in scientific research, whereas private investment clearly had such an impact. Another topic taken up at the conference was whether the EU could and would develop in a more liberal direction. Professor Gissurarson’s participation in the conference formed a part of the joint project by RNH and AECR, the Alliance of European Conservatives and Reformists, on “Europe, Iceland, and the Future of Capitalism”. Professor Gissurarson used the opportunity in Florence to undertake some research on the life and works of Niccolò Machiavelli. After his stay in Florence Professor Gissurarson went to Rome to meet with Professor Antonio Martino, Italy’s former Foreign Minister and Defence Minister, and a former President of the Mont Pelerin Society, an international academy of liberal scholars. Martino, who was also long Professor of Monetary Theory, is an adviser of RNH.