Classical liberals or libertarians can both be religious and atheists, according to RNH Academic Director Professor Hannes H. Gissurarson who was a commentator in a session on the moral foundations of the free society at the 2016 general meeting of the Mont Pelerin Society in Miami 18–23 September. The speakers in the session were Dr. Yaron Brook of the Ayn Rand Institute who argued that people of reason had to reject religion and Dr. Samuel Gregg from the Acton Institute who maintained that Christianity was compatible with both liberty and reason. Father Robert Sirico was in the chair.

Professor Gissurarson pointed out that some more or less pagan societies seemed to have had a firm moral basis, such as the ancient Romans and the Japanese. Undeniably, however, the only real resistance put up against 20th Century European totalitarianism had been by the Christian churches. Christianity presupposed that all men were subject to Natural Law, including those holding power. Christianity implied universalism: In the eyes of God everyone was equal, rich and poor, man and woman, black and white. Totalitarianism on the other hand was extreme rationalism, the attempt by human beings to play god. Unlike some other religious groups Christians wanted to render unto Ceasar what was Ceaser’s and to render unto God what was God’s. In other words, Christianity implied the separation of spiritual and secular powers alien to some other religions. Christ had not been a soldier on horseback wielding a sword, like Muhammad. The ten commandments did not have the logical structure of commands, despite their name, but rather that of prohibitions which made them more freedom-preserving than direct order to behave in a certain way.

Professor Gissurarson offered his own interpretation of two well-known Christian parables. The parable of the Good Samaritan was really about 1) the dangers of highwaymen from the mountain, and consequently the need for strong police and defence forces; 2) the treason of the clerks, namely that of the priest and the Levite who passed the victim of the robbers without helping him; 3) the need for men of means who could afford to help victims; 4) the good deed done with the Good Samaritan’s own money. Professor Gissurarson submitted that the eleventh commandment should really be: “Thou shalt not do good with other people’s money.” In the second placem when John the Baptist had said that a man with two shirts should give one of them to his neighbour having no shirt, he had identified the problem of shirtlessness, but not called for an enforced redistribution of income. The problem of shirtlessness could be solved by enabling people to sew their own shirts, providing opportunities to them. The main objective should be flourishing, moderately-taxed shirt factories in full operation.

Professor Gissurarson said that Ayn Rand had been a powerful and underestimated thinker, even if he could not personally endorse her militant atheism. Her distinction between creators and parasites was still valid. Rich people should not be ashamed of their wealth, if honestly acquired. Instead, they should be proud of it. Justified pride in one’s own achievements was not the same as arrogance. Entrepreneurs and capitalists performed important and necessary roles in a growing economy. Both religious people and atheists could belong to the Mont Pelerin Society. Professor Gissurarson’s participation in the conference formed a part of the joint project by RNH and AECR, the Alliance of European Conservatives and Reformists, on “Europe, Iceland, and the Future of Capitalism”. 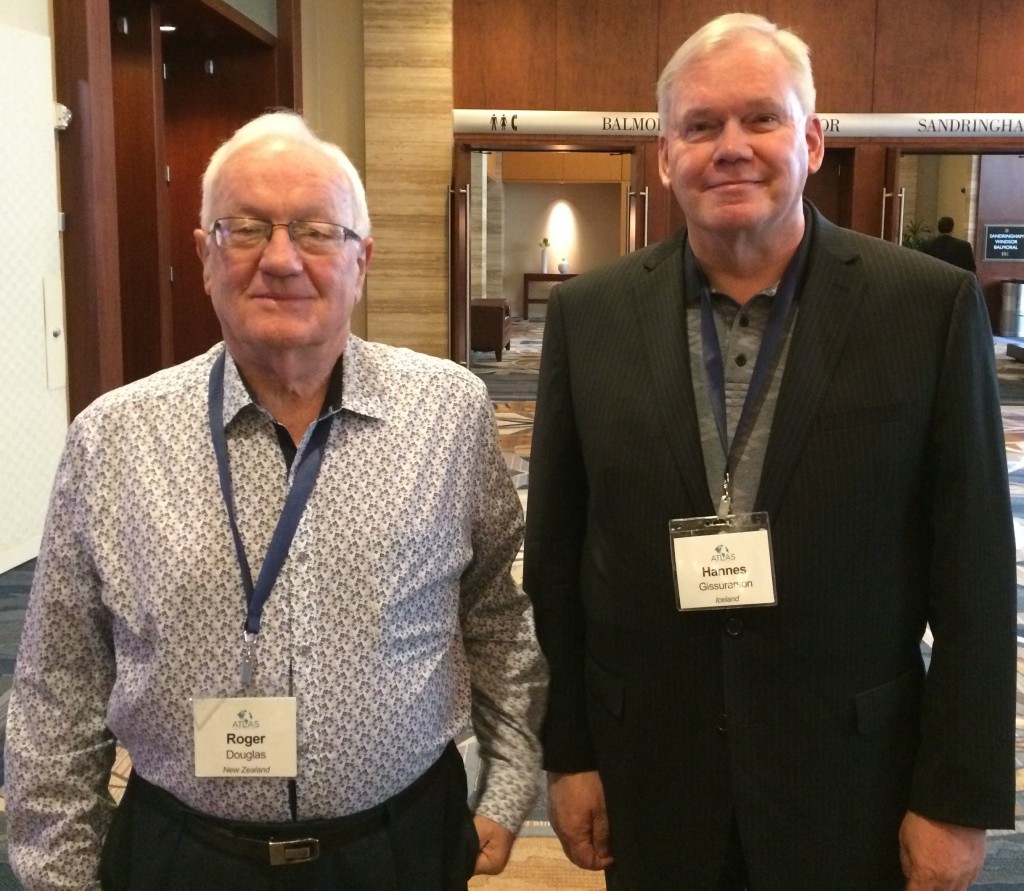 Speakers at the conference included British historian Niall Ferguson, American sociologist Charles Murray, Chilean economist José Piñera, and some well-known American economists such as Nobel Laureate Edward C. Prescott, Professor John Taylor and Diana Furchgott-Roth. Professor Peter Boettke from the US took over as President of the MPS from Spanish Professor Pedro Schwartz. The general meeting was well-attended and well-organised, and regarded by most attendees as having been quite successful. The next regional meeting of the MPS will be in Seoul 7–10 May 2017 and in Gran Canaria 30 September–6 October 2018. After the MPS meeting, Professor Gissurarson attended the Atlas Network Liberty Forum. The Atlas Network is an umbrella organisation for research institutes looking for spontaneous and voluntary solutions instead of coercive government interventions, and seeking to use price rather than force as a lodestar in human interactions. Sir Roger Douglas, New Zealand Finance Minister in 1984–88, and Ruth Richardson, Finance Minister in 1990–93, described the radical and successful economic reforms in their country in the mid-1980s and early 1990s. The American television reporter John Stossel chaired a meeting about how freedom could be promoted by other means than books alone, such as by story-telling and documentaries and even by dramatic films. Linda Whetstone took over as Chairman of the Board of Atlas Network from Daniel Grossman. Linda is the daughter of Atlas Network founder Sir Antony Fisher.