RNH Academic Director Professor Hannes H. Gissurarson gave a talk at the annual conference of the Platform of European Memory and Conscience in Wroclaw City Hall in Poland 17–18 November 2015, describing the  joint project by RNH and AECR, the Alliance of European Conservatives and Reformists, on “Europe of the Victims”. An important part of the project is the production online of works which were published in the past against totalitarianism, while a limited number of copies are also printed for libraries and others interested. In 2015, three books were published in this series, Articles on Communism by British philosopher Bertrand Russell on 17 June, the 60th anniversary of AB, the Public Book Club; Women in Stalin’s Slave Camps by Elinor Lipper and Aino Kuusinen on 19 June, the 100th anniversary of women’s voting rights in Iceland; and Out of the Night by Jan Valtin (aka Richard Krebs) on 23 August, Memorial Day for the victims of communism and national socialism in Europe.

In 2016 it is planned to publish five works on totalitarianism, both online and on paper: Khruschev’s Secret Speech on Stalin 25 February, 6o years after the speech was delivered; El campesino: Life and Death in the Soviet Union, by Valentín González and Julián Gorkin, 17 July, 80 years after the outbreak of the Spanish Civil War; Baltic Eclipse by Ants Oras and Estonia: A Study in Imperialism by Andres Küng, both on 26 August when a quarter of a century has passed since Iceland was the first Western country to resume diplomatic relations with the three Baltic countries; and Service, Servitude, Escape by Aatami Kuortti 25 December, a quarter of a century after the collapse of the Soviet Union. More works are being prepared for republication, including The Hungarian Revolution by Erik Rostbøll and I Chose Freedom by Victor Kravchenko. 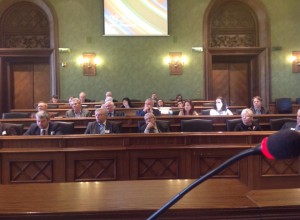 Conference participants were invited to a special meeting celebrating the 50th anniversary of a public declaration by Polish bishops on the necessary reconciliation of Poles and Germans after the terrible events of the past. “We forgive and ask for forgiveness.” Three cardinals were present at the meeting, as well as the Polish Minister of Culture and the Mayor of Wroclaw. At the conference the threats faced by the Ukrainians were discussed, and also attempts by old communists in Central and Eastern Europe to limit access to documents and other evidence of their past misdeeds. At the end of the conference Professor Gissurarson asked for the floor and expressed his own gratitude and that of other participants for the great efforts Dr. Neela Winkelmann, the Executive Director of the Platform, has undertaken in the service of a good cause. He welcomed her continuing employment by the Platform. Göran Lindblad, former MP for the Swedish Moderate Union, was re-elected Platform President. Three members joined the Board of Trustees, American author Anne Applebaum, former Slovenian Prime Minister Janez Jansa and Czech actor Ondrej Vetchý. At the conference, three institutes and associations were accepted to the Platform which now counts 51 members.