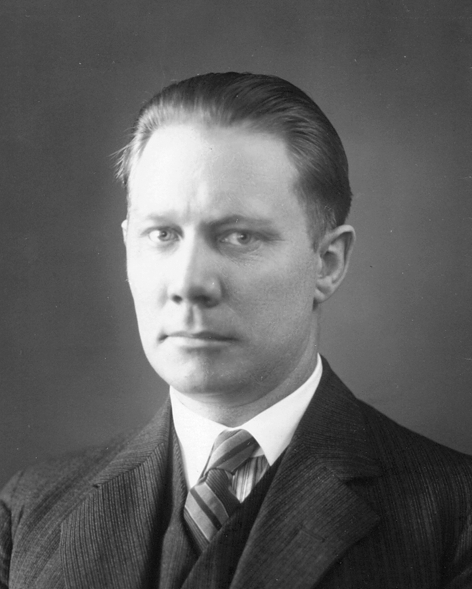 Bjorn Olafsson, born 26 November 1895 in the fishing village Akranes north of Reykjavik, was the son of a poor peasant and fisherman and his wife. The father died in 1901 when Bjorn was only six years old. The widow had to abandon their small farm and to seek domestic employment in farms near Reykjavik, but remarried in 1905. The family was struggling however, and Bjorn only enjoyed three winters of formal education. He had to start working at the Reykjavik post office when he was thirteen years old. Intelligent, ambitious and industrious, he was soon promoted to oversee the bulk mail division. He acquired friends who shared his interest in replacing the Danish merchants that still dominated the import and export of goods in Iceland, and with them, in 1916 Bjorn Olafsson founded a trade company in Reykjavik. In a downturn in the Icelandic economy in 1921–23, he managed to keep his company afloat, through sheer resourcefulness and strength of will. He also founded other companies, for example for processing seafood for foreign markets. He even bought a share in a trawler, with two of his friends, and in a travel agency which assisted the few tourists who ventured to Iceland between the wars.

While Bjorn Olafsson was a self-educated man, because of his skills with numbers and with languages, he soon became a leading merchant and sat as the representative of the Icelandic business community in the commission which handled permissions to buy currency and import goods under the strict controls imposed at the beginning of the Great Depression. Bjorn became a vocal opponent of the economic controls, and criticized his party, The Independence Party, for not using the opportunity in the beginning of the Second World War to abandon the controls when demand for Icelandic goods, mainly fish, increased dramatically, and a chronic shortage of currency turned into an abundance. In 1941 Bjorn went as an Icelandic emissary to the United States where he secured not only a favourable trade agreement with the Americans— who were keen to foster friendship with the strategically located island in the middle of the North Atlantic—but also secured for himself the license to produce Coca Cola in Iceland which would make him a very rich man by Icelandic standards in a few years.

In 1942, during a government crisis, Governor Sveinn Bjornsson, acting of behalf of the Danish King, who was under house arrest by the Germans in Copenhagen and therefore unable to perform his duties as the Icelandic sovereign, asked Bjorn Olafsson to enter a caretaker government of businessmen and lawyers not strongly affiliated with the current political parties. Bjorn Olafsson was Minister of Finance and of Trade for the next two years, and it was during this period that Iceland severed the last ties with Denmark and became a republic. After the War, Bjorn Olafsson bought, with business associates, two trawlers and continued to operate the immensely profitable Coca Cola factory. He owned also a share in a construction company and some other businesses. He decided to stand for parliament in order to fight against the widely unpopular economic controls. He was Minister of Finance and Trade in the minority government of the Independence Party in 1949–1950, and Minister of Trade and Culture 1950–1953 in a coalition government which the Independence Party formed with a smaller party. He was one of the owners of the Reykjavik daily Visir which undoubtedly attributed to his political influence in the 1940s and 1950s.

In 1959 Bjorn Olafsson left politics, and on 11 October 1974 he died. He had been married, to Asta Petursdottir, and had four children, two sons and two daughters. By the time he passed away, he was undoubtedly one of the richest individuals in Iceland. He always remained a firm supporter of increased economic freedom. His son, Petur Bjornsson, who replaced him as director of Coca Cola in Iceland, was also a strong economic liberal, under the influence of Milton Friedman and James M. Buchanan. A short biography of Bjorn Olafsson was published in the magazine Andvari in 2010, by Professor Hannes H. Gissurarson.