Spirited Discussion about the Icelandic Commonwealth 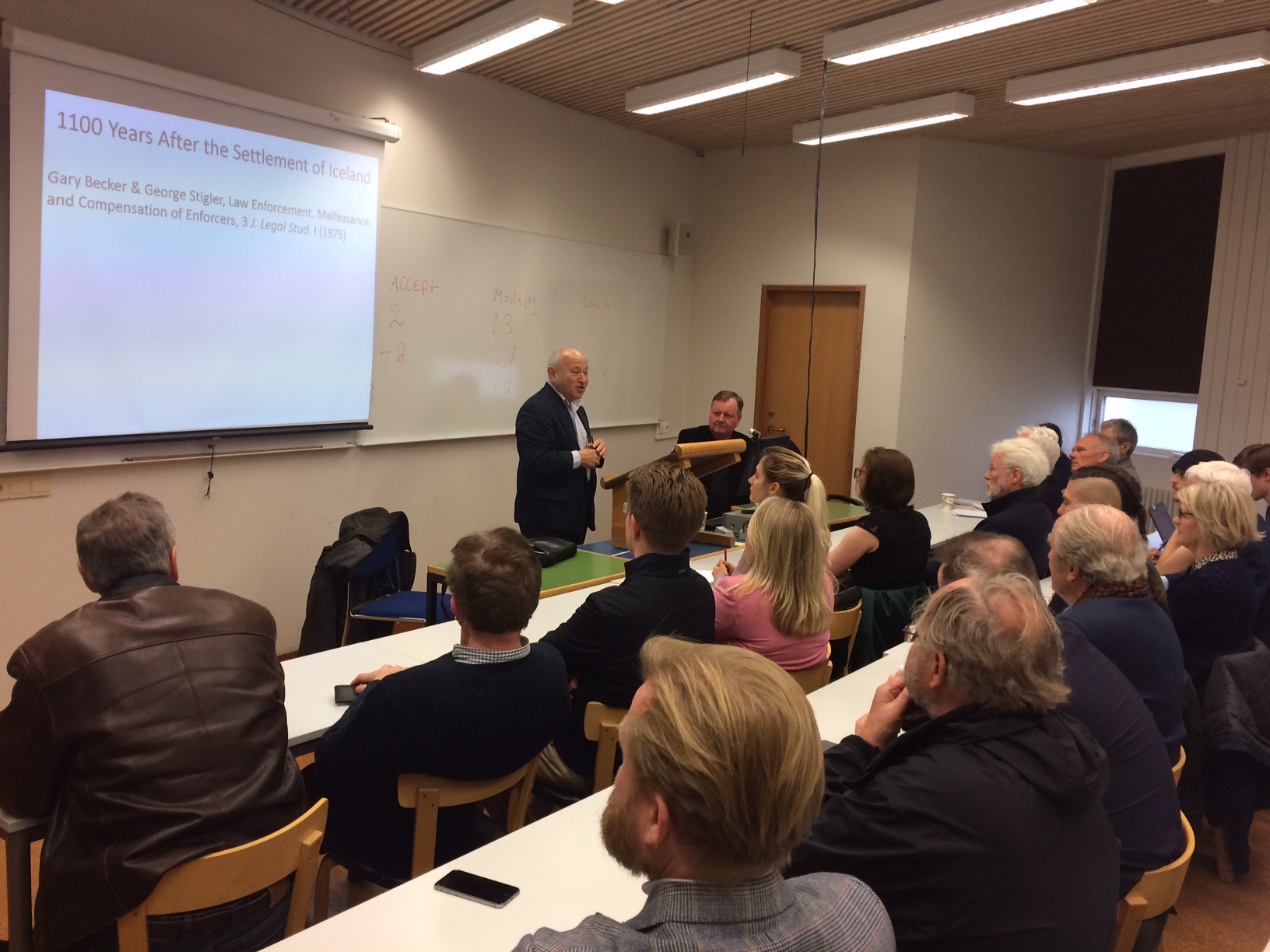 Friedman lecturing at the seminar.

What would it be like to live under law, but without government? When Professor David D. Friedman was reflecting on this question in the 1970s, he realised that people had already done so, in the Icelandic Commonwealth of 930–1262. At a well-attended seminar jointly organised by the faculties of law, economics and history at the University of Iceland Monday 2 October 2017 Professor Friedman shared some of his idea about the Commonwealth. Under the ancient Icelandic system all legal conflicts were tort; no crimes against government existed. For example, the family of a man killed could either demand compensation for him or seek revenge. A weak party such as a poor farmer could obtain the support of his chieftain or he could transfer his case to a more powerful individual. Often special mediators were also appointed in order to stop feuds. Friedman noted that the Icelandic Commonwealth was relatively stable. It was in place for three hundred years without much bloodshed unlike what for example happened in the conquest of England. The adoption of Christianity had also been surprisingly peaceful. Friedman added that he could identify several contradictions between the description in the sagas of Icelanders of legal operations and the stipulations in the Icelandic law-book, Gragas, which was now available in an English translation.

Professor Jesse Byock was the commentator on Friedman’s lecture. He submitted that the contradictions identified by Friedman were probably mostly caused by people not following to the letter all the stipulations of the law-book. The sagas of Icelanders and Sturlunga saga were better evidence of the daily life of Icelanders in this period. Some scholars of the past had emphasised the sagas as literature and even exaggerated their literary quality, but he conceived of them more as descriptions of how to live under law and without government. They were about resolutions of conflicts in a stateless, poor and primitive island. The ancestors of the Icelanders had emigrated from Norway in search of plots of farm land where they would not have to pay taxes. This had moulded their political system which made it difficult to compare it with rules developed among the Romani people or the Somalis, as Friedman had attempted. Byock agreed with Friedman that the Commonwealth had been more peaceful than many had thought. For example, archeological excavations demonstrated that farmers’ houses were rarely burned down during conflicts.

Many other issues of the Icelandic Commonwealth were discussed, in a spirited exchange of opinions. The audience at the seminar included Justice Minister Sigridur A. Andersen, former Social Democratic Leader Jon B. Hannibalsson, Philosophy Professor Vilhjalmur Arnason and Economics Professors Ragnar Arnason and Asgeir Jonsson. Professor Birgir Thor Runolfsson chaired the seminar. RNH’s support for it forms a part of the joint project with ACRE, the Alliance of European Conservatives and Reformists, on “Europe, Iceland, and the Future of Capitalism.”