Protests against the Icesave Deal at the President’s Residence. Photo: Omar Oskarsson for Mbl.

The Report of the Special Investigative Commission, SIC, into the 2008 Icelandic bank collapse was informative, but it did not explain the collapse itself. The SIC’s explanation was that the banks had grown too rapidly and become too big. But this was a necessary and not a sufficient explanation for their collapse, Professor Hannes H. Gissurarson argued at a luncheon meeting of the Icelandic Historians’ Association 17 October 2017. According to him, five decisions made abroad turned a predictable economic downturn into a total collapse: Hedge funds targeted Iceland as the weakest member of the European inner market; European central bankers, irritated over deposit collection by the Icelandic banks and their use of loan facilities at the ECB, refused to provide them with liquidity; the US no longer acted as Iceland’s protector and ally; the British Labour government rescued all British banks except the two of them which were under Icelandic ownership, and thus it felled Kaupthing in Iceland; and the British Labour government imposed an anti-terrorist act on Iceland.

Gissurarson gave a brief account of the relationship of Iceland to the UK and the US over the centuries. As Lenin pointed out in 1920, with the introduction of airplanes and submarines Iceland had become strategically important. Therefore the US had been a protector and ally of Iceland in 1941–2006. The British had never been interested in seizing Iceland, but they wanted a say in who would be ruling her. In 2007, the Scottish Nationalists were challenging Labour’s traditional stronghold in Scotland, speaking of an “arc of prosperity” stretching from Ireland through Iceland to Norway and suggesting that Scotland should be a part of it. Both Gordon Brown and Alistair Darling regarded the Nationalists as a direct threat. They had therefore been quick to grasp the opportunity to demonstrate the perils of independence.

Gissurarson claimed he had evidence which he would publish in a forthcoming report for the Icelandic Ministry of Finance that it was not at all inevitable for the UK government to impose an anti-terrorist law on Iceland. He asked where the European Commission had been when the UK government discriminated against British banks by closing down only those two which were under Icelandic ownership (KSF and Heritable) while rescuing all other British banks. It was however, he said, a blessing in disguise that Iceland was left out to fend for herself. With the Emergency Act passed in the collapse the Icelanders had paved the way for a new system of banking in Europe, as suggested by the fact that the EU recently had adopted priority of depositors’ claims. It would however have been desirable if Iceland could have avoided the agony and bitterness which were the consequences of the bank collapse. A lively discussion followed the lecture, where participants included Bjorn Bjarnason, former Minister of Justice, Professor Ragnar Arnason, former banker Ragnar Onundarson and former Icelandic Ambassador to France Tomas I. Olrich. The lecture was recorded and can be accessed on the website of the Historians’ Association. Both Bjorn Bjarnason and Sigurdur Mar Jonsson, Press Secretary in the Prime Minister’s Office, wrote blogs about it, and Morgunbladid gave an account of it 19 October. Gissurarson’s lecture formed a part of the joint project with ACRE, the Alliance of Conservatives and Reformists in Europe, on “Europe, Iceland and the Future of Capitalism”. 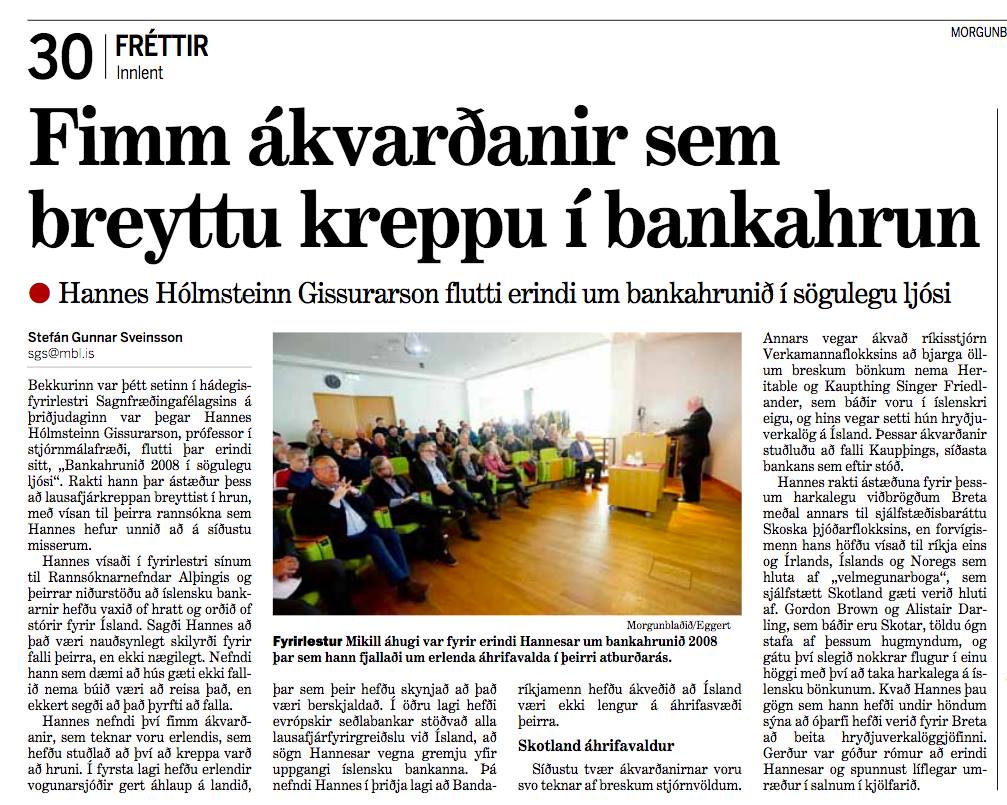