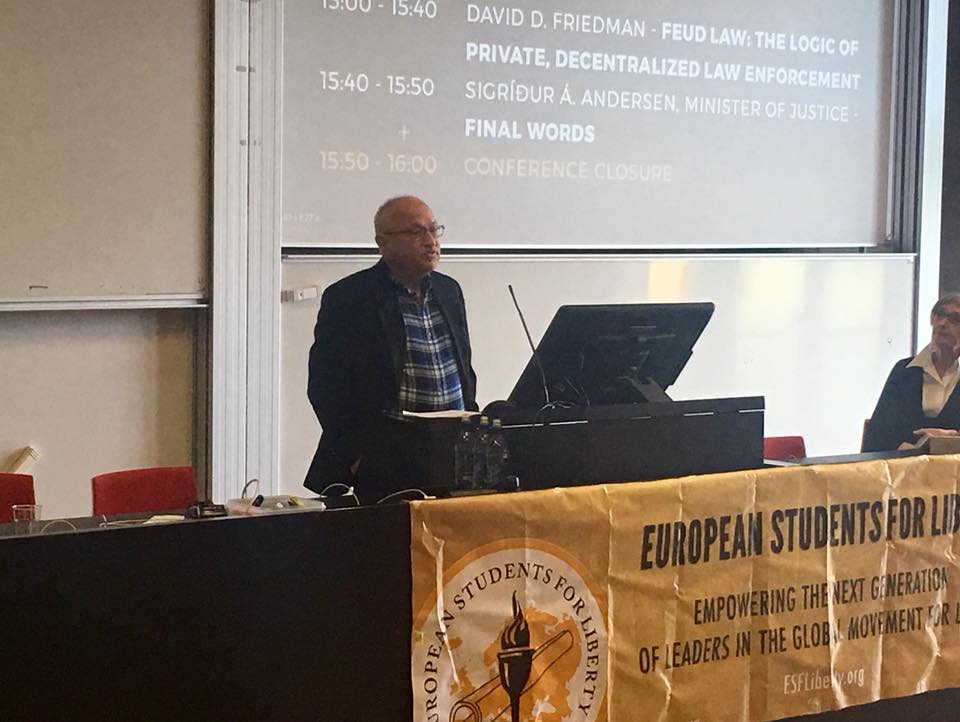 RNH supported the regional meeting of the European Students for Liberty and the Icelandic Association of Liberal High School Students, held at the University of Reykjavik Saturday 30 September 2017. Three speakers were sponsored by RNH, Dr. Daniel Mitchell, and Professors Edward Stringham and David D. Friedman. The meeting was well-attended and successful. Mitchell recalled the undoubted existence of the so-called Laffer Effect: At a certain tax rate tax revenue will reach a maximum and after that it will fall with an increased rate. He stressed however that the objective should be to maximise economic growth, not tax revenue. This was almost certainly achieved by a lower tax rate than that leading to a tax revenue maximum. Stringham pointed out that in free transactions people could resolve many issues without resorting to government compulsion, using examples from a recent book of his, Private Governance, published by Oxford University Press in 2015. Friedman spoke about law without government, on which he is now writing a book. He is the author of many books on law and economics and has done research on the Icelandic Commonwealth.

Before noon, Erna Yr Oldudottir chaired the meeting, and in the afternoon Ragnhildur Kolka. Its chief organisers were Magnus Orn Gunnarsson, Marta Stefansdottir and Isak Hallmundarson, with a group of committed high school students. Some foreign students also attended the meeting. RNH Academic Director Hannes H. Gissurarson invited the foreign lecturers and some other guests to a barbecue at his house Friday evening, and asset management company Gamma gave a party for all participants Saturday evening at its headquarters. Participants also received T-shirts and books which philosopher Tom Palmer has edited for Atlas Foundation, Why Liberty: Your Life, Your Choices, Your Future, and Peace, Love & Liberty. RNH’s support for the meeting formed a part of its joint project with ACRE, the Alliance of European Conservatives and Reformists, on “Europe, Iceland and the Future of Capitalism”. RNH’s Academic Director, Professor Hannes H. Gissurarson, offered a few concluding remarks: