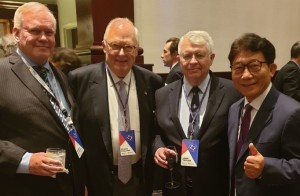 RNH Academic Director, Professor Hannes H. Gissurarson, attended the regional meeting of the Mont Pelerin Society in Dallas/Fort Worth 19–22 May 2019. The meeting was devoted to contentious issues in classical liberalism. One such issue was monetary order: Is a central bank necessary? Or the gold standard desirable? Or cryptocurrencies efficient? Is monetary competition feasible? Professor John Taylor, Dr. Warren Coats, Professor Larry White and other monetary economists debated this issue. Another contentious issue was immigration. Everybody agreed that hard-working, law-abiding immigrants seeking jobs and a better living standard were desirable. But what about immigrants in pursuit of welfare benefits? How far should the West go in opening up its borders to millions of self-proclaimed asylum seekers and thus reigniting xenophopia? Professor Gissurarson made an intervention in this session, arguing that it was undesirable to see closed enclaves or ghettos of immigrants and asylum seekers who willingly were breaking the laws and customs of their host countries, as could be seen in Denmark and Sweden, with both countries now applying stricter rules to such people.

A third contentious issue was the size of government. Professor David Friedman argued that the Icelandic Commonwealth of 930–1262 was an example of the feasibility of private enforcement of law. Professor Edward Stringham recalled many examples of private governance over time and space. At the meeting several other issues were discussed, such as government interference with sex between consenting adults and with the use of addictive drugs. Again, interventionism in international affairs was debated, for example the United States military actions in Vietnam and Iraq. One afternoon, Professor Vernon Smith, the 2002 Nobel Laureate in Economics, chatted about the greatest influences on his thinking, Adam Smith and Friedrich A. von Hayek. It was indeed von Hayek who founded the Mont Pelerin Society in the spring of 1947 to provide a forum for classical liberals to discuss and develop ideas on a regular basis.

Gissurarson’s participation in the Dallas meeting formed a part of a joint project with ACRE on ‘Bluegreen Capitalism for Europe’. Two young economics professors, Benjamin Powell and Robert Lawson, efficiently organised the meeting. The next regional meeting will be in Stanford in California 15–17 January 2020, and the general meeting of the MPS will be in Oslo 1–5 September 2020. Professor Gissurarson attended his first MPS meeting at Stanford in 1980, sponsored by von Hayek, was on the Board of Directors of the Society in 1998–2004 and organised a regional meeting in Reykjavik in August 2005.