The Public Book Club (Almenna bokafelagid) on 1 December 2018 published a collection of six Cold War speeches by six prominent anti-communist poets and writers, In Defence of Western Civilisation, with a 40 pp. foreword and 70 pp. endnotes by Professor Hannes H. Gissurarson. In his discussion of the cultural front in the Cold War, Gissurarson applied the concept of totalitarianism to describe and explain the position of the six authors. In a speech reprinted in the book, poet Tomas Gudmundsson had argued that a new kind of slavery had been introduced in modern times, spiritual slavery, where one was not only to obey Big Brother, but also to love him.

At a seminar organised by RNH and the Institute of Public Administration and Politics at the University of Iceland 17 May 2019, Stefan Snaevarr, Philosophy Professor at Lillehammer University in Norway, criticised the concept of totalitarianism. It was wrong to regard national socialism as a branch of socialism proper, he argued: the Nazis had privatised many companies. Socialism was not “the road to serfdom”, as Friedrich von Hayek had asserted in a famous book. Economic planning was compatible with democracy. Gissurarson replied that a distinction had to be made between voluntary and coercive socialism. He had nothing against people forming socialist enterprises like workers’ cooperatives or farmers’ collectives: indeed, the free economy was nothing but a framework around and facilitating individual choices.  Coercive socialism however always implied that people were not allowed to choose for themselves: Force was used to drive them in the “right” direction. Of course Swedish ‘nursery school socialism’ was much better than Russian ‘labour camp socialism’, but classical liberals rejected both these kinds of socialism, instead supporting individual freedom and the responsibility going with it.

Professor Olafur Th. Hardarson chaired the seminar. RNH participation in it formed a part of the joint project with ACRE on ‘Europe of the Victims’. Iceland’s journal of record, the daily Morgunbladid, published an account of the debate on 6 June: 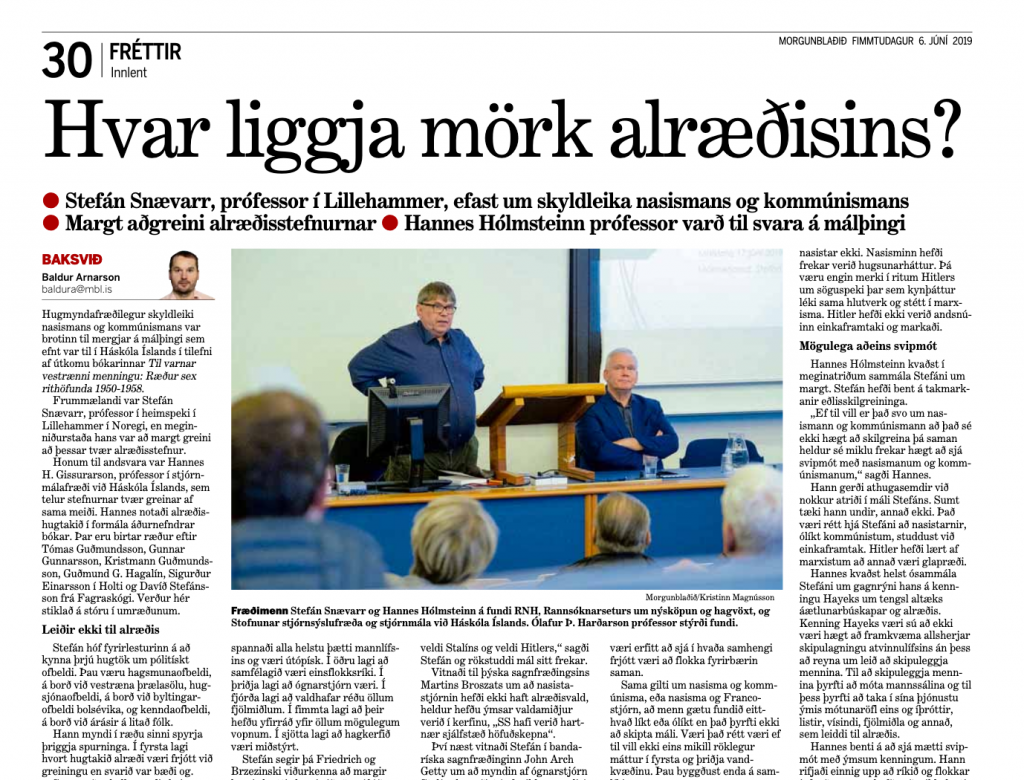