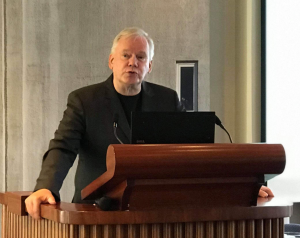 RNH Academic Director, Professor Hannes H. Gissurarson, criticised the theories of John Rawls and Thomas Piketty in a lecture to the Free Summer School, conducted by the Association of Libertarian High School Students, in Reykjavik 1 June 2019. His lecture was mostly derived from a report he wrote for the free market think tank New Direction in Brussels. Gissurarson argued that Rawls was wrong both about individuals not being entitled to the income they created by their different abilities, and about there being somehow a heap of money out there waiting to be distributed. Rawls asked in which kind of system the worst off would be as well off as they could be: he wanted to maximise the minimum. But this implied that his theory was not really about justice. It was about prudence, preparing for the worst rather than hoping the best. It was however, Gissurarson admitted, an interesting question in which kind of system the worst of would be as well off as they could be. Arguably, this was in a free economy such as that envisaged by Adam Smith.

Gissurarson observed that the difference between Rawls and Piketty was that Rawls was concerned with poverty which certainly was a social evil, whereas Piketty worried about wealth which did not by itself seem to be much of a problem when it was not created at the expense of others. But poverty had been greatly reduced in the last few decades in the world. Piketty demanded extortionary international taxes on high income and large fortunes in order to reduce inequality. But he ignored the fact that much inequality was created by government intervention, for example by patents and government guarantees of banks. Piketty also did not make much of another fact, that many enterprises were owned by pension funds. When Piketty spoke about capital, he moreover excluded human capital whose distribution among people was most likely more even that the distribution of physical capital. The evidence suggested, Gissurarson added, that in the last few decades many more billionaires were self-made than before. Inheritance was a dwindling source of wealth. Piketty was fond of quoting Père Goriot by Balzac. But that novel demonstrated the precariousness of wealth, Gissurarson argued, not a tendency for it to accumulate in the hands of a few.  The protagonists of the novel were driven by passions and spent their money wastefully. Be that as it may, the main point was not to increase the size of one portion of the cake by reducing the size of another one, but rather to ensure that the whole bakery was flourishing, turning out more and larger cakes.

The Association of Liberal High School Students operated the Free Summer School in cooperation with Institute of Economic Affairs in London and the Foundation of Economic Education in New York. It was organised by high school students Julius Viggo Olafsson and Hermann Nokkvi Gunnarsson. Other lecturers at the Free Summer School were Aslaug Arna Sigurbjornsdottir, Christopher Snowdon, Gunnlaugur Jonsson, Halldor B. Thorbergsson, Johannes Stefansson, Magnus Orn Gunnarsson and Piotr Markiełaŭ. Attendance was good, and the discussions were lively. Gissurarson’s participation in the event formed a part of the joint project with ACRE on ‘Bluegreen Capitalism for Europe’.