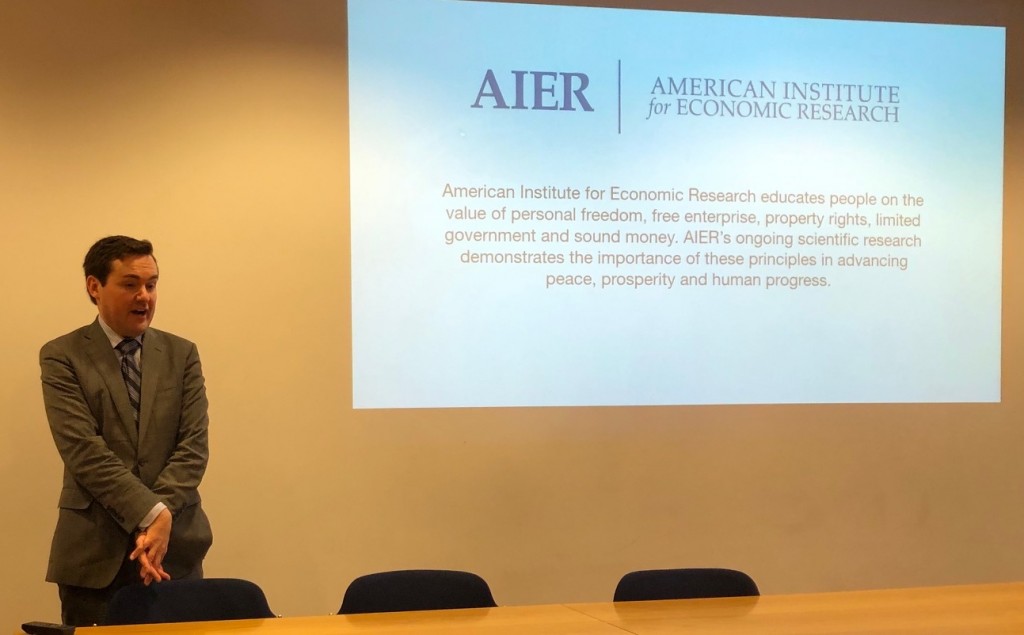 Saturday 7 September 2019, in the afternoon, the American Institute of Economic Research held a seminar at Hlidarsmari 19 in Kopavogur. The speakers, Professor Edward Stringham and financial expert Brad DeVos, talked about the Institute and about French 19th century writer Frédéric Bastiat, an eloquent defender of free trade, as is demonstrated by his famous essays on ‘What is Seen and Unseen in Political Economy’ and ‘The Petition of the Candlemakers’. In the former essay, Bastiat points out the invisible consequences of trade restrictions, and in the latter one the candlemakers demand protection from another producer of light, the sun. At the meeting, the Icelandic Bastiat Society was founded, one of many such societies in the world, under the leadership of Magnus Orn Gunnarsson.

In the following discussion, Professor Hannes H. Gissurarson pointed out that the first Iceandic treatise on economics, Audfraedi (The Theory of Wealth) by Arnljotur Olafsson, published in 1880, had been written very much in Bastiat’s spirit, as the author himself acknowledged. Bastiat had many other disciples in the Nordic countries in the 19th century, including Swedish statesman Johan August Gripenstedt who had created the preconditions of Sweden’s wealth by extensive liberal reforms in 1856–1866. One of Bastiat’s works, The Law, has been published in Icelandic, and RNH is going to have it reprinted as soon as possible. The accessible introduction to economics by Henry Hazlitt, Economics in One Lesson, written under Bastiat’s influence, is also available in Icelandic.

Stringham and DeVos were in Iceland for the conference of Students for Liberty the day before. RNH’s support of the Icelandic Bastiat Society forms a parts of a joint project with ACRE, the Alliance of Conservatives and Reformists in Europe, on ‘Bluegreen Capitalism’.