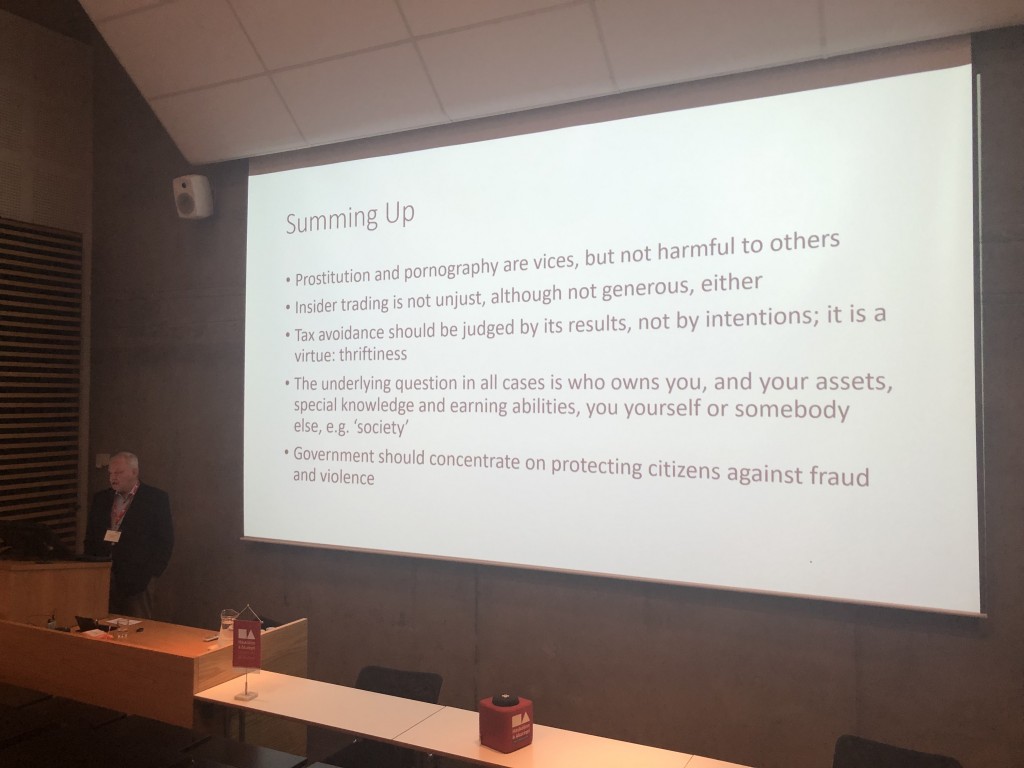 At a conference on policing and crime at Akureyri 6 October 2021, Professor Hannes H. Gissurarson, RNH Academic Director, argued that some vices should not be crimes. In his support he quoted St. Thomas Aquinas (Summa Theologiae, I, ii, Question 96, Article 2): ‘Now human law is made for the multitude of men, and the greater part of this multitude consists of men who are not perfected in virtue. And so not all the vices from which virtuous men abstain are prohibited by human law. Instead, the only vices prohibited are the more serious ones, which it is possible for the greater part of the multitude to abstain from—especially those vices which are harmful to others and without the prohibition of which human society could not be conserved. For instance, homicide and theft and other vices of this sort are prohibited by human law.’

Gissurarson discussed four disreputable activities, prostitution, pornography, insider trading and tax avoidance. Radical feminists hold that prostitution and pornography are not victimless: on the contrary, they say that both these activities involve the degradation and exploitation of women and should be banned. Gissurarson agreed with them that that prostitution was degrading, but not only for women but rather for all who participated in them. But this did not necessarily mean that it should be banned. Probably, the consequences of banning prostitution and pornography were worse than the consequences of tolerating and monitoring these activities. Gissurarson also pointed out that the internet had largely removed the rogue intermediaries who had in the past oppressed prostitutes and porn actors: now the sellers of sex were often in direct contact with their customers online. This at least weakened the argument from exploitation. The limited resources of the police should be spent on suppressing vices which were harmful to others, as Aquinas had said.

According to Gissurarson, the widely-held idea that insider trading was harmful was not necessarily true. How could you lose money on stock you did not own? It was wrong, Gissurarson submitted, to conceive of it as a loss for someone if he or she did not make the same profit from trading in stocks as an insider did. Of course the insider information should be obtained legally and not fraudulently, not by breach of trust. Moreover, it could be argued, Gissurarson added, that insider trading increased efficiency in that it hastened the adjustment of the market to new information. It tended to correct situations in which some companies were valued below or above their real worth. Gissurarson mentioned a famous example Aquinas used about a merchant from Alexandria who arrived in Rhodos after a famine. He brought a lot of desperately needed wheat on his ship, but he knew unlike the islanders that more ships were on their way. Did he have to reveal this ‘inside’ information? Aquinas said: No. He would be generous if he did so, but he did not act unjustly by not disclosing his educated guess that the supply would soon increase.

Gissurarson emphasised the distinction between tax evasion and tax avoidance. While tax evasion was usually both immoral and illegal, there was nothing wrong with tax avoidance when it simply meant that you tried not to pay more in taxes than you were obliged to do. It was no more wrong than when you wanted to travel and you searched for the best airfare online. Those who criticised it seemed to assume that the level of taxation was optimal which was hardly ever the case. Indeed, the possibility to move from one country to another was an indispensable source of information about the preferences of taxpayers, how much they wanted government to provide of public goods. It was also a necessary constraint on government. Tax avoidance was not only about the mobile rich transferring assets to low-tax countries. It was also about ordinary people responding to a heavy tax burden by switching from work to leisure. The main reason, for example, that the Europeans worked fewer hours than the Americans was that their income was taxed much more. Excessive taxation shrunk the tax base. Gissurarson concluded that tax avoidance was not only useful, but that it was also a virtue rather than a vice, because it was an instance of thriftiness.